“It Looked As Though He Was Quitting”

Mynhardt speaks ahead of EFC AFRICA 25 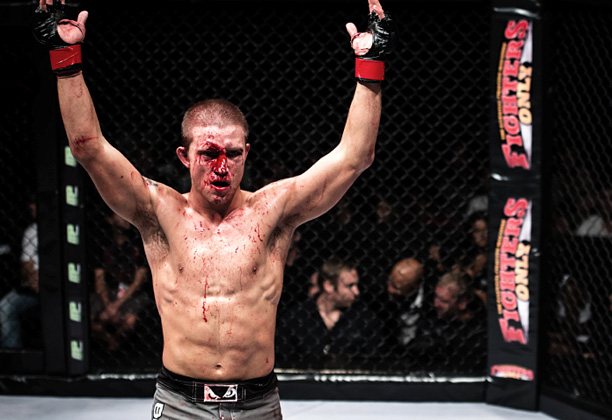 Leon Mynhardt after his victory over Madge at EFC AFRICA 13

Johannesburg, South Africa – Leon ‘Iron Lion’ Mynhardt and Don ‘Magic Man’ Madge first fought in April 2012. Over three rounds both men tore each other apart in the most phenomenal and talked about striking display seen on the continent to date. On 7 November they do it again, this time a full five rounds between each and victory, and Madge’s lightweight champion’s belt the prize. In this Q & A, Mynhardt looks back on his victory, and toward the future.

How do you score your first fight with Madge?

I think he dominated most of it by the looks of the cuts he made in my face, but I never felt like I was in trouble after my coach Morne told me it’s a small cut. “You can fight…”

What’s your version of the end of it, the ‘controversial’ end?

I don’t know what went through Don’s mind at that point, but it looked as though he was quitting.

Was Madge close to finishing you at any point?

Why did you choose to go to Tiger Muay Thai for training, knowing it’s Madge’s camp away from home?

Nothing like that. I went there just to train under pressure from the amount of talent that goes there and get focused as many foreign fighters go there to do the same. I went to Tiger on my own in the past to do the same. I would recommend it to anyone.

Madge says you know what he did to you in your last fight, and more of the same is coming. What’s your response?

I don’t get stuck in the past, I’ve done my homework.

How would you rate Madge’s title performance against Ioannou?

It was awesome to see how he’s evolved from Muay Thai to MMA. Impressive.

Would you prefer to fight this fight standing or on the ground?

It’s Mixed Martial Arts. Standing or ground no longer exists in this sport. You got to have a full arsenal.

Madge says he has no emotion attached to this fight; he’s not looking for revenge. Do you believe that?

You won your last fight, but with all the talk of the ‘controversial’ loss sometimes it seems like the victory wasn’t yours. Do you feel that?

Was your first bout with Madge your toughest so far?

Not at all. I’ve had many battles in my career and that one wasn’t the toughest. I was still feeling fresh after the last round.

How do you rate Madge as a fighter?

Don has come a long way, and I respect him for his achievements.

With the history between you, is this bout about more than the belt for you? Do you feel you need to prove your victory against him?

I don’t fight with emotion. I fight with aggression and will-power. I want to be the best.

This is your second title attempt. How important is winning the belt to you?

I have one goal this time and all my focus is on winning no matter what.

Do you have any words for Madge?

I wish him all the best in preparation for this fight.

EFC AFRICA 25, presented by MusclePharm, takes place on Thursday 07 November at GrandWest, Cape Town. Tickets on sale now at www.computicket.com. Stream the entire event, live and in HD, from efcafrica.tv.