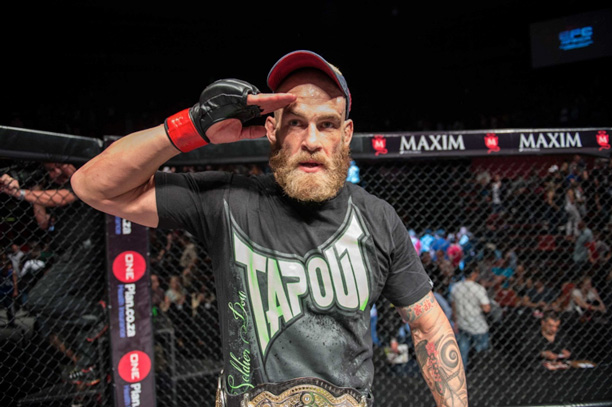 Smith vs. McLellan 2 was the main event of the evening, and arguably the most spectacular. The two men last fought in March 2012, where McLellan relinquished his middleweight title to the Pitbull. Tonight the challenger took the fight to the champ in a close and aggressive battle that had both landing numerous strikes. The bout went to ground where McLellan managed to secure top position and land a devastating elbow strike that caused Smith’s nose to gush blood. McLellan then took the champion’s back and applied a rear naked choke, ending the bout in the first round.

The evening’s co-main event was an EFC AFRICA milestone where for the first time two non-South Africans were competing for the title. DRC born challenger Alain Ilunga faced Angola’s own, and undefeated, Demarte Pena. Billed as a certain strike fest, instead this bout was technical and drawn out. Pena controlled the action easily, his strength and experience leaving no opening for Ilunga. Pena took the fight by unanimous decision, in the process setting a new record of an incredible five title defenses.

In the only heavyweight bout of the evening, Ruan Potts finally got to face Ricky Misholas, a chance denied him at EFC AFRICA 20 when Misholas pulled out of their scheduled fight only hours before. Tonight the bout went as most expected. Potts rushed Misholas, took him down, and tied him up with a sophisticated ground game.

Brendon Katz made his return to the EFC AFRICA Hexagon after a more than two year’s absence. Up against Gareth Buirski at featherweight, both men had huge KO’s in their wake and promised a thrilling match. The bout started slow, but built to a crescendo as the pressure of a closely fought, clinical war intensified. It took the judge’s to separate the two; Katz taking it by unanimous decision.

JC Lamprecht vs. Dricus du Plessis kicked off the evening’s main card, and it was a fight to remember. Two incredibly similar fighters, they went at each other in a phenomenal display of all round MMA, pushing each other past their individual limits. Du Plessis remained marginally in the lead throughout, until the battle climaxed in the third round with Du Plessis rocking Lamprecht with a punch, opening the way for a victory by rear naked choke.

EFC AFRICA moves to Cape Town and the GrandWest Grand Arena for EFC AFRICA 25, presented by MusclePharm, on 07 October 2013. Tickets on sale soon at www.computicket.com.