A brief look at Mbuyi 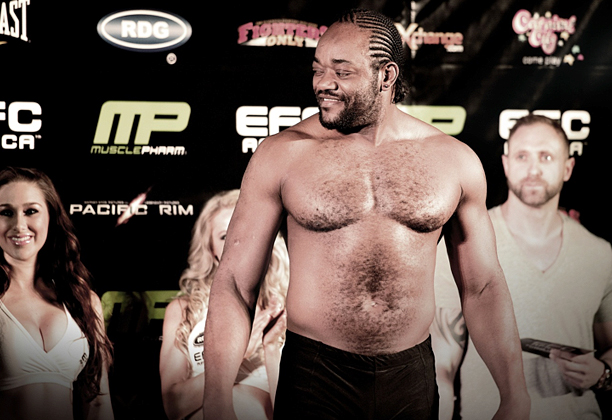 Johannesburg, South Africa – Vandam Mbuyi relocated from the Democratic Republic of the Congo to South Africa in 2006.

A Judo black belt with a record of 10-1, he soon entered the Johannesburg MMA fray when he joined Godfather MMA, and took his first amateur fights.

“He is an incredible athlete,” said Brad Bloch, Mbuyi’s trainer. “When he started with me he was walking around at 125kg’s. Today he’s down to 107kg.”

“With his Judo background he had a lot to learn about MMA,” Bloch continued. “With no Gi, it’s a very different discipline.”

Vandam entered the Hexagon at EFC AFRICA 21 and produced a three round striking war with Egyptian Mohamed Karim. According to his camp the giant played it smart in his first outing, sticking to one two combinations to outscore his opponent and take the win.

At his second appearance he faced near seven foot Wilhelm ‘Tiny’ Strauss, and knocked the man out cold in 28 seconds.

A source in Mbuyi’s camp confirms that for his coming bout with Sors Grobbelaar, at EFC AFRICA 25, he is evolving himself into a new, even more powerful animal.

There’s also a softer side to the big man. Children love him. He’s made a habit of arriving early for his sessions, when the gym conducts children’s fitness and MMA classes, and chatting with the kids.

“He’s a big teddy bear to them,” said Bloch. “He’s got a lot of time for the youngsters, teaching and joking.”

On November 7 Sors Grobbelaar’s high level kickboxing onslaught will demand a different kind of beast, which Vandam will be happy to provide.

“Sors is a great athlete,” said Bloch. “We’re seeing him as a test and stepping stone. Vandam is ready for a higher level of opponent. We’ve got a big surprise in store for everyone next Thursday.”