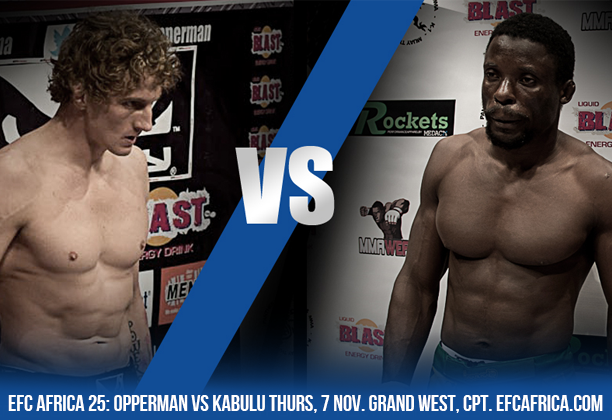 Johannesburg, South Africa – Former welterweight champion Michiel Opperman is one of the most prolific finishers in the EFC AFRICA organisation today. At EFC AFRICA 25 he faces one of the continent’s most difficult men to put away, Francois ‘Frenchman’ Kabulu.

In Opperman’s past 17 fights only two have gone to a decision, including the unforgettable five round war he fought with new champion Dino Bagattin just over a month ago.

His record of 10-7 bares looking into. It is well known that Opperman comes from a striking a background (a Kyokushun world champion) and that it took time for him to master the ground fighting arts of MMA.

It was at his EFC AFRICA debut in September 2011 that he began to show his dominance in that arena, finishing and winning his first four fights by way of submission, including his title win over BJJ black belt Jadyson Costa.

Opperman’s EFC AFRICA four fight win streak was on the back of a further four straight wins achieved outside of the organistion, taking his win streak total to a massive eight, only the first of those going the distance with a split decision victory.

Opperman is a master of finishing, but at EFC AFRICA 25 he meets a machine manufactured, it seems, to go the distance.

Francois Kabulu is 6-3 in the EFC AFRICA organisation, five of those nine fights going all the way. In his last five bouts, the first a loss and the rest four straight wins, all were full three round encounters.

He has been described by both Martin Van Staden and Leon Mynhardt as the strongest opponent they have faced, and his style shows. He is fearsomely strong, thriving on closing the distance and grinding an opponent down.

On Thursday November 7 the ultimate finisher faces the ultimate challenge. Will Opperman finish the ‘Frenchman’?