2013’s Biggest Bout To Close Out The Year 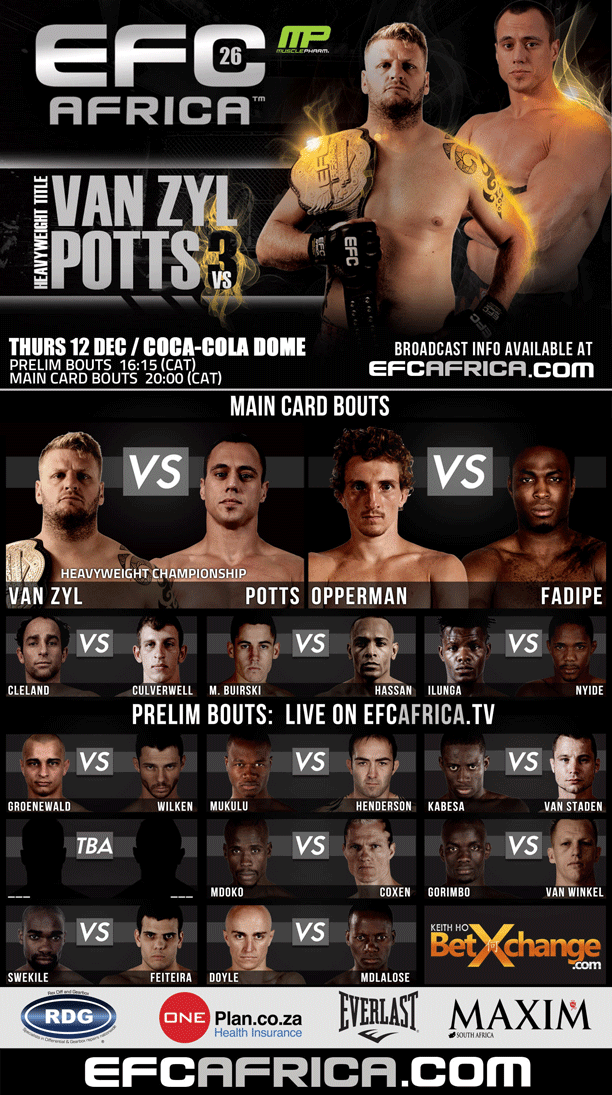 Johannesburg (South Africa) – EFC AFRICA returns to the Coca-Cola Dome for the final and biggest event of the year. Andrew ‘One Gear’ van Zyl and Ruan ‘Fangzz’ Potts face each other in the organisation’s first title trilogy, a milestone for the sport on the African continent.

Van Zyl and Potts first faced each other At EFC AFRICA 11 where Potts won by guillotine in the first round. At EFC AFRICA 18 they fought again. Van Zyl dominated over five rounds to take Potts’ title. At EFC AFRICA 26 their titanic struggle finally plays comes to a head. On December 12 it’s best out of three.

Former champion Michiel Opperman clashes with the Nigerian born Irishman, Henry Fadipe, in a top of the division battle. Opperman has stepped into this bout after teammate Adam Speechly pulled off injured, and will be looking to reignite his title aspirations. Fadipe offers a serious challenge. After two performances the Irishman has displayed massive talent, putting the legendary Martin van Staden away with a brutal first round submission. Against Opperman he’ll be making use of his full arsenal.

Matthew Buirski makes his third outing at bantamweight against the veteran, former title contender Abdul Hassan. Hassan has previously only fought at featherweight and makes the cut to bantamweight for the first time. He’ll be bringing a truckload of power to the bout, something the equally powerful Buirski will welcome.

Controversial all-round phenomenon Liam Cleland returns to the Hexagon after nearly a year’s absence. In his way stands Jason Culverwell, Richards Bay’s golden boy. Culverwell burst onto the EFC AFRICA stage with two massive performances, but lost form in his next two outings. At 2-2 he is primed to deliver on the superstar form he initially showed.

The DRC’s Alain ‘Commander Boy’ Ilunga goes up against Durban’s Peter ‘Kratos’ Nyide, an exceptionally tough athlete. He will need all of his grit to face Ilunga’s legendary kicks, blows that have resulted in TKO’s twice before.

EFC AFRICA returns to the Coca Cola Dome, Johannesburg, for EFC AFRICA 26, presented by MusclePharm, on Thursday 12 December. Tickets on sale now at computicket.com. Stream the entire event live, in HD, at efcworldwide.com/efc_africa_404.php