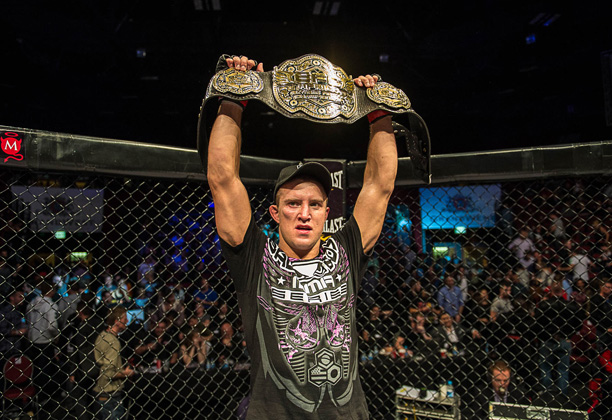 The bout between Madge and Mynhardt was the evening’s main event and by far the most anticipated. Madge and Mynhardt first met the last time EFC AFRICA visited Cape Town, in April 2012, and put on an unforgettable stand-up war. Last night’s rematch could not have been more different, with the bulk of the match taking place on the ground, highlighting the huge evolution of both men in the MMA arena.

The bout was controversially close, with Mynhardt taking the win by a split decision that had Madge’s hometown crowd in an uproar.

Mynhardt was stoic in his response. ‘I fought a hard fight,’ he said. ‘The decision stands. The win is mine.’

In terms of the growing rivalry between these two, it is now 2-0 to the new champ. Madge will no doubt be looking for a third opportunity, with EFC AFRICA president Cairo Howarth alluding to an instant rematch in the post event press conference.

In the evening’s co-main event, Capetonian light heavyweight champion Gideon Drotschie defended his title against Johannesburg born Fraser Opie. Opie came out hard in the first, dominating the local athlete with a strong clinch game, but the tide turned in the second. Drotschie showed his pedigree by taking Opie down, taking full mount, and dropping massive ground and pound, forcing referee Wiekus Swart to call a halt, giving Drotschie the TKO victory.

Michiel Opperman and the DRC’s infinitely tough Francois Kabulu delivered trench warfare in an intense, three round grappling showcase. Opperman constantly searched for the submission, tying Kabulu up at times, but was unable to finish. Kabulu finally succeeded in out striking his opponent to secure a points victory.

Brendon Groenewald took on his biggest test to date in the form of established Angolan wrecking machine Bernardo Mikixi. The two men traded big strikes in the first, Groenewald goading Mikixi at times, but the battle settled from there. Over three rounds a game of strategy ensued, Mikixi finally pulling ahead on points. Groenewald put on a hard fight, and many will feel it should have gone the other way.

Heavyweights Sors Grobbelaar and Vandam Mbuyi put on a tense, technical battle punctuated by huge strikes landed by both men. Mbuyi got the better of the exchange, working harder and longer.

The knockout of the night award went to Boney Bukaka for his second round KO of Lourens Botes. Fight of the night was awarded to Chad Hepburn and Igeu Kabesa for their three round encounter.

EFC AFRICA 26, presented by MusclePharm, takes place on Thursday 12 December at the Coca Cola Dome, Johannesburg. Tickets on sale now at computicket.com. Stream the entire event, live and in HD, from efcafrica.com.