Will Van Zyl vs. Potts 3 go the distance? 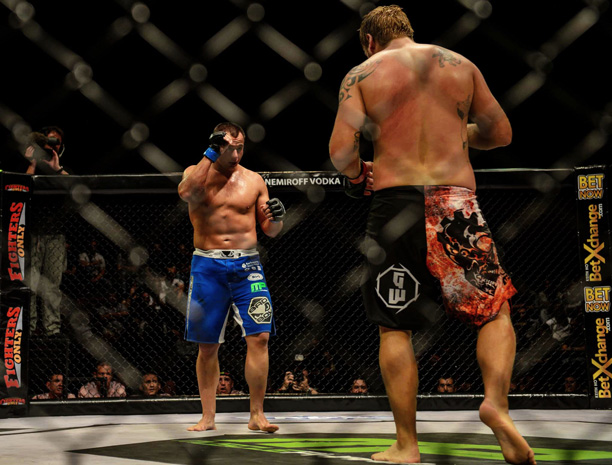 Johannesburg (South Africa) – When Andrew van Zyl and Ruan Potts face each other for the third time, on December 12, each man’s ability to push through the rounds will have be integral to the outcome.

Both are among the most prolific finishers in the EFC AFRICA organisation. Van Zyl has only had one of his 11 fights go past the second round. Potts has had only two of his 7 and is the holder of the fastest submission on the African continent (37 seconds, vs. Mahmoud Hassan).

On the surface of it, then, both athletes should not be too concerned about the ability to fight the full five rounds, except when considering their history with each other.

The only time both have gone to a decision was at EFC AFRICA 18, where Van Zyl took Potts’ belt. They are evenly matched.

Potts has often been accused of inferior conditioning in the past. In his bout with Bernardo Mikixi he seemed dull, despite finishing the Angolan powerhouse in the second by ground and pound. Many have commented that he seemed to lose steam after the second in his five round encounter with Van Zyl, after totally dominating the first.

His performance against Norman Wessels, though, is often overlooked. There the two battled evenly for two rounds before Potts put him away by ground and pound in the third.

Van Zyl, however, is known for his superb fitness. He completed a half Iron Man (1,930m swim, 90km bike ride, 21km run) before his second fight with Potts, and has recently completed the 94.7 cycle challenge. His conditioning is also the source of his fight name. ‘One Gear’ attacks at one intensity, the highest, from the start, and doesn’t stop.

Between these evenly matched men a long fight is likely and conditioning will be the key.