Understanding the past is key to EFC AFRICA 26 success 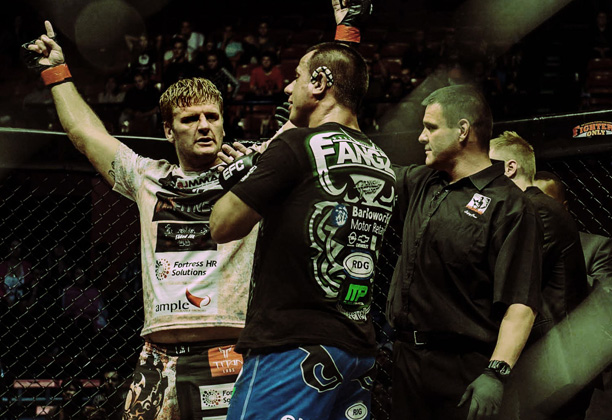 Van Zyl celebrates his victory over Potts at EFC AFRICA 18

Johannesburg (South Africa) – On December 12 history is made when EFC AFRICA’s first title trilogy plays out at the Coca-Cola Dome. Heavyweight champion Andrew van Zyl defends his belt against Ruan Potts, the same belt that Van Zyl took from Potts earlier this year.

The rivalry between Van Zyl and Potts is epic. Both have proven themselves to be operating on a skill level unmatched by any other heavyweight on the continent to date. They are seemingly untouchable.

The history between them is a crucial element of their coming bout. Each has only ever lost to the other.

The first time they fought, on 11 November 2011, Potts submitted Van Zyl by guillotine inside the first round. That defeat happened at the Coca-Cola Dome. Their coming bout is the first time EFC AFRICA has returned there since.

“I don’t know if he’s superstitious,” said Potts in a recent interview. “I know I am. He has bad memories from the venue. I’m going to be giving him another one.”

In March this year Van Zyl returned Potts’ favour, defeated him after an epic five round war at Carnival City, one that took both men to their limit. Van Zyl has some insight on how Potts must be dealing with that loss, having been in the same position himself.

“He’s climbing the hill again,” said Van Zyl. “He’s going to be angry and he’s going to be motivated. I just need to be fitter, stronger and quicker. I’m ready to take it anywhere.”

“The best thing that could have happened is I lost,” said Potts. “I went back to the drawing board. I looked at where I went wrong and looked at all my previous fights, finding all weaknesses that I can improve on. I know he thinks that he knows where my weaknesses are. I’m happy that he thinks that, because he’s not seen the full package. This time he’s going to.”

A third and final encounter between these two men is the only way for them to end their rivalry. Each will be looking for an emphatic, once and for all victory.

“What you put in is what you get out,” said Potts. “I’m creating bad memories. He’s going to have bad memories because of my hard work.”

EFC AFRICA returns to the Coca Cola Dome, Johannesburg, for EFC AFRICA 26, presented by MusclePharm, on Thursday 12 December. Tickets on sale now at computicket.com. Stream the entire event live, in HD, at efcafrica.tv