“I’m Ready For Whoever”

Fadipe hungry for the title 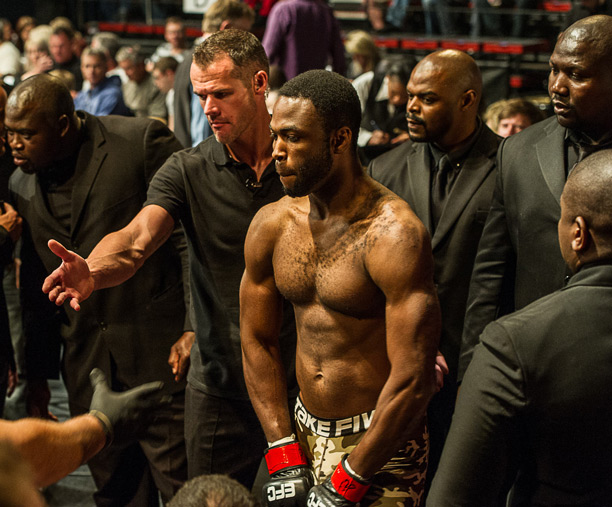 Johannesburg (South Africa) – At EFC AFRICA 26, held on 12 December at the Coca-Cola Dome, Henry ‘Herculeez’ Fadipe, the Nigerian born Irishman, faces Michiel Opperman on the main card. Fadipe was originally slated to face Adam Speechly, but Speechly had to pull out with a freak injury sustained in training. In this Q & A Fadipe lays down his view on the change of opponent, and how hungry he is for a shot at the title.

Are you put out at having to face a different opponent on short notice?

No, not really. I’m ready for whoever. I don’t tailor my training according to my opponents. I train all round, improving and perfecting to better Herculeez.

Do you think Speechly was right to pull out?

I was disappointed about the situation but not necessarily at Speechly. I understand why it had to be cancelled, it’s pretty obvious from the photo that he was in no condition to continue with the fight. I don’t hold anything against him because I know he was training hard for me, the injury only proves that. In this sport stuff like that is bound to happen time to time.

Opperman and Speechly are teammates. Do you see a big difference between them? Will you be changing your training emphasis?

Like I said I don’t tailor my training, I know when I get my belt I will have to fight all of them at some stage anyway so I’m not too bothered when. I have only ever seen either of them fight once and that was only because I was also fighting on the show. I don’t study my opponents nor do I pay too much attention to their intentions.

As a former champion do you think he’ll have an edge on you in terms of experience?

I am also a former champion, a current one and soon to be a new one. So no, I don’t think that will play any role in our contest.

From riding an eight fight win streak to suddenly sitting on two losses, do you see Opperman as dangerous in terms of being determined, even desperate, to not lose again?

Opperman is dangerous in general regardless of winning streaks or losing streaks. Any fighter in our current situation is desperate. We are all hungry to get to the top of the pyramid. But no one in this division has a bigger appetite than me.

He’s fought twice in the last three months. Another loss would be a big setback. Is he making a mistake taking you on?

Anybody that says “yes, I’ll fight Herculeez” is making a mistake.

How do you see the fight going?

I see me winning.

Have you got any words for Opperman?

I love you bro but I’m going to have to beat you. Sorry but I’m on a mission here.

11th December you owe me a KFC bucket for my forgiveness!