“It Was A Freak Accident” 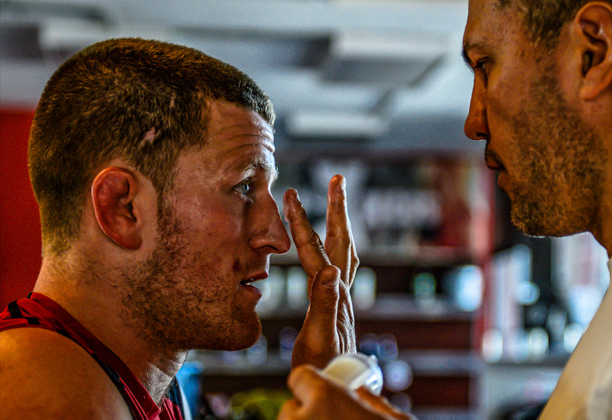 Johannesburg (South Africa) – Yesterday Adam Speechly had to pull out of his main card, EFC AFRICA 26 bout with Henry Fadipe due to a freak injury sustained in training. In this Q & A Speechly goes behind the scenes on the decision to pull out.

We were doing some shadow MMA drills. I ducked under his punches to go for his legs and he had his knee up waiting for me.

What did you think immediately after?

It was all very surreal. I could tell something had happened and that I had been detached from my senses temporarily, but I wasn’t quite sure what.

How bad did you think it was?

I saw that there was some blood, and I had a numb feeling on the corner of my lip. I had never felt that before but I could tell it was pretty serious.

What did the doctor say?

He said it was a complete split, and that the stitches would come out before the fight, but that it would split open upon any contact even then.

Could you have avoided the accident?

Not really, it was a freak accident and these can happen when you are training for a fight.

How are you feeling about losing out on this fight? Talk us through your emotions and thoughts after the injury until now.

Of course it is a big let-down for me. I had just begun to find my rhythm in my training, and to be a part of such a great fight card is something I relish and find really motivating! But to be honest I have focused on keeping a clear perspective and positive attitude about it. These things are a part of the sport and not within my control, and sometimes life takes things from our grasp so that our hands are open to receive something better.

Was there a chance that you could fight? Talk us through the decision to pull out.

It was a decision I could have justified either way. On one hand the stitches were coming out before the fight and I would have been able to keep myself physically fit and still have peaked at the right time. However, in order to protect the cut I would have had to avoid all forms of contact training at a time when it is essential part of my preparation. EFC needed an answer right away, I discussed it with my coaches and training team, and we agreed that this was the only viable decision to make at this point in time.

You are now in the exact reverse position that you were to Michiel Opperman at EFC AFRICA 19, where you stepped in for him against Martin van Staden, and put yourself right into top contention with your victory. What stands out for you about this situation?

It’s Michiel’s turn to return the favour. That’s what teammates are for right?! 🙂

Bigger and better things!! It’s an opportunity for me to focus on a few areas that I was forced to overlook in preparation for this bout, and I look forward to being ready for my next upcoming challenge!