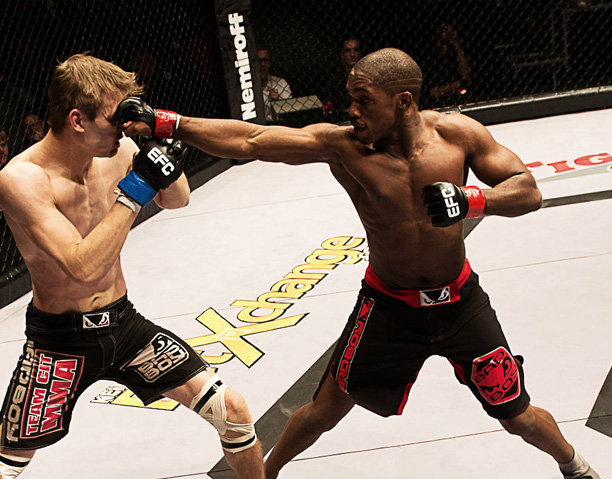 Johannesburg (South Africa) – This week Barend Nienaber was rushed to hospital with an acute case of appendicitis, forcing him to withdraw from his EFC AFRICA 26 main card bout with Alain Ilunga, taking place on December 12.

For the last two days EFC AFRICA matchmaker Graeme Cartmell has been in talks with two athletes, Leo Gloss and Peter Nyide, about filling the spot left by Nienaber.

“Both Gloss and Nyide were very excited to fight,” said Cartmell. “Both are extremely exciting athletes, however, talks with Gloss stalled.”

Gloss’ camp insisted that he was not fighting fit at this stage, and that preparation time was too small to make sure that he was ready to compete.

Gloss has stated that he will be ready to compete in March, 2014.

Nyide has been Abdul Hassan’s principal sparring partner in his EFC AFRICA 26 build-up (he clashes with Matthew Buirski on the main card), and is therefore more than ready to step in on short notice.

“Nyide puts on amazing fights,” said EFC AFRICA president Cairo Howarth. “He took his first EFC AFRICA bout on short notice, against Frederich Naumann, at a higher weight division. He put on a fight of the night performance against Markus Taljaard, with two broken hands. He’s a phenomenal competitor. He’ll be a tough challenge for Ilunga.”

EFC AFRICA returns to the Coca Cola Dome, Johannesburg, for EFC AFRICA 26, presented by MusclePharm, on Thursday 12 December. Tickets on sale now at computicket.com. Stream the entire event live, in HD, at efcafrica.tv.