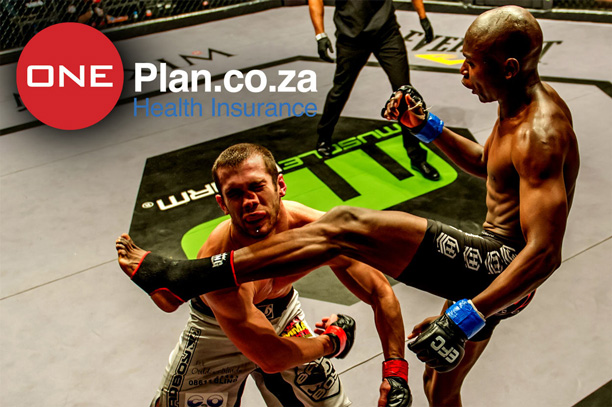 Johannesburg (South Africa) – At EFC AFRICA 24 Craig ‘Nemo’ Ninow suffered a dramatically broken nose courtesy of a headkick from number one bantamweight contender Nkazimulo Zulu. Today it was confirmed that ONEPLAN Health Insurance will be paying a sum to Ninow under their recently signed, landmark deal with EFC AFRICA, where athletes receive disability cover.

Ninow received the injury in the dying seconds of the final round of his bout with Zulu. After the blow he fought on, returning strikes before collapsing at the sound of the buzzer. He was immediately taken to hospital and had reconstructive surgery performed the following day.

His injury has taken him out of competition for six months.

“Craig was the first instance we’ve had where our relationship with ONEPLAN Health Insurance could be called on,” said EFC AFRICA president Cairo Howarth. “ONEPLAN were excellent. We put in the application and we immediately got an answer.”

Ninow’s payout is calculated on his loss of fight earnings in the six months he will not be able to compete.

“I’m blown away,” said Ninow. “When I started competing in MMA there was no cover like this, I just assumed I would have to deal with any injuries on my own. This is a huge bonus. A big thank you to ONEPLAN and everyone involved. It’s an early Christmas present!”

Ninow works as an MMA coach and fitness instructor when not competing at EFC AFRICA. He was able to return to coaching three weeks after the injury, and will be back in competition early next year.

“We’re happy we could help,” said Michael Otten, the managing director of ONEPLAN. “We genuinely care about the health and financial wellbeing of EFC AFRICA’s athletes. We wish Craig a speedy recovery and look forward to seeing him back in competition.”