‘Double D’ Out, Dricus In 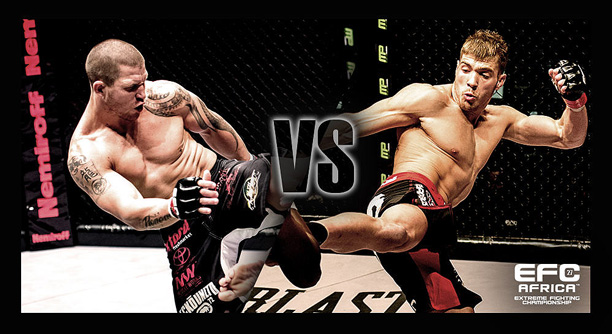 Johannesburg (South Africa) – Late last night news was received that Darren Daniel, scheduled to face Donavin Hawkey in a clash of legends, has had to pull out of the February 27 matchup due to an ankle injury. This morning it was confirmed that 20 year old Dricus du Plessis, former WAKO K1 world champion and undefeated in over 35 fights, will step in to face Hawkey in a massive test.

At 20 years old Dricus du Plessis is a sensation. The veteran of 30 K1 bouts in which he is undefeated, 27 of those victories by knock out, and earning the title of WAKO K1 world champion at the age of 19, he first entered the Hexagon in July of 2013.
In three bouts since he has recorded three finishes, two in the first round (Makuebo/EFC AFRICA 21, Mukulu/EFC AFRICA 23) and one in the third (Lamprecht/EFC AFRICA 24). Most significantly, two of those were by submission, certain proof that the K1 specialist had made the full transition to MMA.

Donavin Hawkey, however, is an opponent in a different league. The most experienced athlete in the EFC AFRICA organisation with a massive record of 21-10, he is a brutal boxer who will be relishing the chance to take it to the young former world champion. Hawkey is currently on a vein of vicious form, having demolished three times Nigerian kickboxing champion Raymond Ahana in a three round boxing war at EFC AFRICA 20.

For Du Plessis the fight of his career is just under four weeks away. Taking it on short notice is not a problem for him, as he recently returned from intensive training in Thailand, and already fighting fit.

When Hawkey and Du Plessis meet it will be a career defining moment for both. Should either take it they will be in the running for a title shot; Du Plessis on the strength of four straight, impressive wins, Hawkey proving that the always top contender is back at the pinnacle of the division.

Both men have proven themselves to be go forward, incredibly aggressive athletes. Expect a war of attrition on February 27.

Daniel was sparring on Saturday 25 January when he fell awkwardly. Immediate pain took him out of the session, and subsequent scans revealed a torn ligament in his right ankle, forcing him to withdraw from the card.
Fans can expect a full release on Daniel’s injury and recovery schedule shortly.