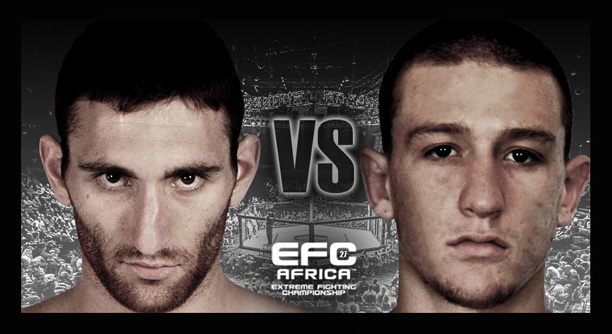 Johannesburg (South Africa) – On February 27 one of the EFC AFRICA organisation’s most eagerly awaited debutants, Mark Hulme, gets his first taste of the Hexagon against the vastly more experienced Josh ‘The Jedi’ Muller.

At only 19 years old Hulme currently lives in his gym, sleeping on a blow up mattress stowed beneath the boxing ring during the day. He has stated that he is ready for this fight, that he has focused everything on it and that Muller will not stand in the way of his first professional victory.

Muller is an opponent not to be underestimated. Making his first appearance at EFC AFRICA 07 against Mike de Bruyn he has been involved in five EFC AFRICA bouts since then, including matches against Francois Kabulu and Wade Henderson. He holds a pro MMA record of 5-3.

While Muller has experienced loss more often than Hulme, the difference between amateur and professional fights is huge. Hulme comes into this bout supremely prepared with the mentorship of two current champions and two former ones. Muller comes armed with the concrete knowledge of how to win in the Hexagon, and more importantly, how to respond when things begin to go wrong.

On February 27 Mark Hulme will be looking to put in an epic first performance as the next step on an already epic career. Muller and the cool head of experience stands in his way.