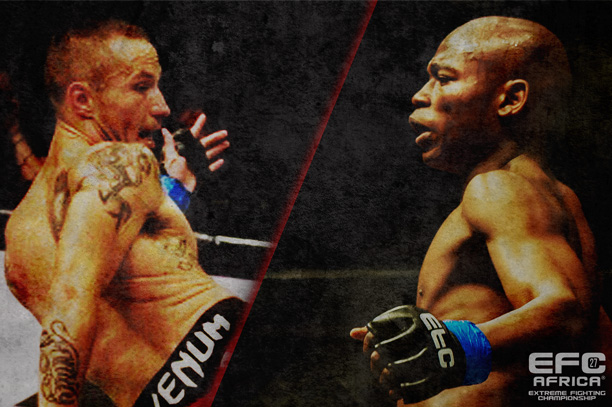 Johannesburg (South Africa) – Can a teammate really fight a teammate, and can the team survive? EFC AFRICA’s Milton Schorr gets inside Weyer vs. Zulu for the inaugural bantamweight title on February 27. The first of a three part series.

It started in Graeme’s [Cartmell, EFC Africa Matchmaker] office one morning.
“What do you think of Zuluboy vs. Charlie Weyer?” he said.
“Zulu vs. Weyer? But they’re in the same camp.”
“So?” says Graeme, “why not?”
He’s got a certain kind of grin, does Graeme, a certain kind of ‘fuck the rules, we’ll do it anyway’ kind of attitude. Turns out he’s not the only one. Turns out I’m the last to know. “Why not?” echoes Cairo [Howarth, EFC Africa President], “why wouldn’t it work?”
I tell them why. It wouldn’t work because they’re in the same camp. They train together. I tell them that the essence of MMA is the unknown, that’s where the drama is, that’s what makes a fight a fight. The crowd’s watching an athlete step into the unknown, I say, that’s the danger. We have to not know what’s going to happen. If they’re from the same camp, there’s no unknown, there’s no danger.
The statement turns in the air, and dies. Graeme starts grinning again, so does Cairo. We all know it’s not true. It’s not the unknown that makes a fight a fight, it’s the fight itself. It’s when the spirit of the fight takes over and they start smiling, that’s when.
“It’s never been done before,” says Cairo. “We’re going to do something that’s never been done before. It’ll be awesome.”
I hit Google. He’s right. It seems like it’s never been done before. I can’t find a case of two guys fighting each other from the same camp while training from the same camp for a title.
Maybe it’s happened, somewhere, but we don’t know about it.
“What will happen?” asks Cairo. “Either they’re going to stay friends, the team is going to hold, or the team’s going to break down. In both cases they’re going to fight, and it’s going to be good.”
I’m left with a lot to think about, a lot to write stories on. Suddenly it seems like a good idea, suddenly it seems like a fight we can sell.

A few days later Team Tapout arrives at the office to sign the fight. Now’s the time to find out from Coach Wiekus Swart, Coach Walter Wendt, Charlie and Zuluboy themselves. We troop into the boardroom.

“There’s an EFC belt at stake,” says Charlie. “This is why we do this. No one gets in there just to enjoy the fight. That belt is the ultimate goal. There are millions of fighters looking for this dream, and we’ve been offered that.”
Solid point. I jot it down.
“We’ve been thinking about this for months,” says Swart. “This isn’t easy. Both of our guys are top contenders. If we don’t let them take it, someone else will. That’s not fair to either.”
I’m scribbling and thinking. The last time Zuluboy fought was against Craig Ninow. 30 seconds before the end of the third he knew he had to do something big to clinch the round, and the fight. He sent out a headkick that caught Ninow on the nose, staving the whole thing back into his skull.
“What about injury?” I ask. “What about dropping an elbow that you know can cause a fracture? What about snapping an arm, breaking a cheek? You prepared to do that to your friend?”
I think I may have scored, found the chink, the pretence.
Zulu laughs. Charlie smiles. “Ninow should have blocked,” he says.
The coaches are chatting with Cairo, Graeme’s shuffling paperwork.
“I boxed against my best friend once,” says Charlie, musing, “as an amateur. On the night you do what you do. There’s no animosity between two professional fighters. You can fight, hit each other, try and fuckin just do what you have to do and still be friends afterwards.”
“It’s just a fight,” adds Zulu. “We just going to go out there and fight. I’m not looking forward to being enemies, we just going to fight. We teammates, we train together. We just going to go there and put on a good show.”
Contracts come out. Eyes start whizzing down pages, pens get passed around. I’m thinking, and it goes like this:
Say one of you starts pulling ahead in training. Say one of you starts losing confidence. Say one of you starts to think, to know, that the other is better. Who do you talk to? Say, after the fight, the guy that loses feels humiliated. Say he doesn’t want to train with the champion anymore. Say he’s lost face. What then? What about the team?
And:
Zuluboy grew up in a township. At the moment he lives in a room above the gym, he’s doing everything he can to break out of poverty. Charlie’s middle class. He’s 31 years old, engaged and a father. Zulu is 23 and single. Does that make a difference? Does Zuluboy want it more? Does he deserve it more? Does Charlie?
We’re six weeks out from the event. I don’t know which of these questions are right and which would just evaporate under the lights. I do know that the next six weeks are going to show us. Coach Swart says they already know each other’s styles, so what does it matter? I say; how are they going to spar each other, how are they going to keep it ‘friends’, knowing that this is the one that’s standing in the way of their dream?
“When I step in I don’t show anger towards my opponents, I don’t hate them, I go in there to show my skills,” Weyer said earlier. “We are athletes,” he said, ‘it’s not about animosity or drama.” Right. But is there really no emotion when a belt is on the line? And if there is emotion, if there is an enemy, where does the war really begin and end?
The contracts are signed, hands are being shaken and Team Tapout is walking out the door. I stop them for a picture and ask if there’s anything else anyone wants to say.
Zuluboy nods. “We’ve both been working so hard to get to this point,” he says. “It’s us. It’s happening. Let’s fight.”