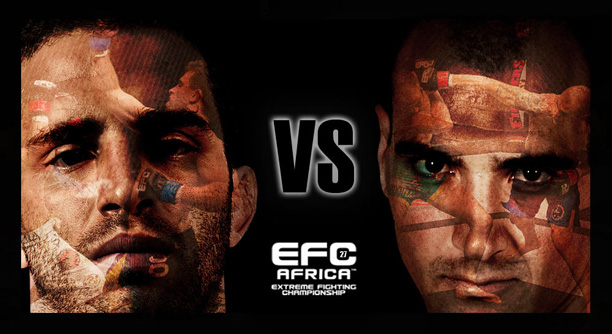 After suffering a comprehensive defeat at the hands of Leon Mynhardt at EFC AFRICA 15 Cheboub reapplied and reinvented himself. At EFC AFRICA 20 he fought debutant Sibusiso Mdoku in an unrelenting to and fro battle that went the distance. On that occasion Cheboub sustained a cut after elbowing Mdoku’s mouth in the dying seconds of the fight, and a three day stay in hospital to treat the resultant infection.

Cheboub receives treatment for a gash to the elbow, EFC AFRICA 20

He was soon back in action, going up against ground specialist Khalil Akleker at EFC AFRICA 23. Again Cheboub delivered three rounds of intensity, finally winning by unanimous decision in a fight that punched from beginning to end.

Van Schalkwyk ahead of his bout with Naumann, EFC AFRICA 18

With both men supremely willing and able to go the distance, both veterans of unrelenting battles and both seeing excellent form, these two promise one tough battle on February 27.

This main prelim bout can only be seen live at the venue, or streamed live and in HD from efcafrica.tv.