Middleweight title on the line, March 27 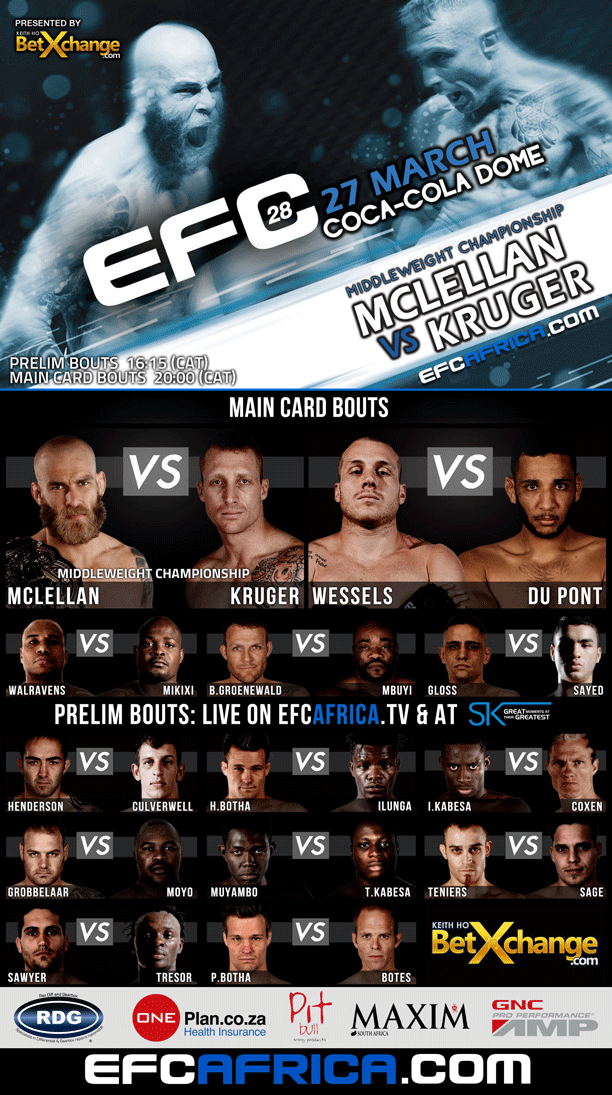 The undefeated Kruger (5-0) secured his number one contender spot with a sensational victory over Tumelo Maphutha at EFC AFRICA 22. Facing some of Africa’s hardest ground and pound, and injured after a series of brutal outside legkicks, he executed an out of the blue armbar that snapped his opponent’s collarbone. In McLellan, however, he has met his ultimate match.

‘Soldierboy’ is an African MMA phenomenon. Known for his unrelenting aggression he is a man on the warpath after his spectacular destruction of former champion Jeremy Smith. The first man to reclaim an EFC AFRICA title, he has stated that ‘someone will have to be a science project to beat me now. I’m never giving up this belt.’

Former heavyweight champion and former light heavyweight title contender Norman ‘Chef’ Wessels (5-2) returns to the Hexagon after a battle with a rare blood condition. He was last seen in one of the most memorable title bouts in EFC AFRICA history. There he took the battle to JP Joubert in brutal fashion, cracking his opponent’s skull with precision elbows.

His opponent at EFC AFRICA 28 is the much younger athlete Chris ‘Danger’ Du Pont (4-1). ‘Danger’ has said that he’s not intimidated by the legendary ‘Chef’, and promises a performance of a different caliber than Wessels has faced before.

Heavyweight behemoths Christophe ‘Bomaye’ Walravens (3-1) and Bernardo ‘Black Panther’ Mikixi (5-4) clash in a precision vs. power matchup. The DRC born Walravens has shown impeccable striking technique as well as a chin that can absorb massive ground and pound. Angola’s Mikixi is famous for his devastating fists. He has dropped the biggest men on the continent and knows a victory against the two fight win streak ‘Bomaye’ will put him back in title contention.

The DRC’s giant, Vandam Mbuyi, gets another crack at Cape Town’s Brendon Groenewald after their first bout ended in a controversial disqualification for Mbuyi. Both men are in top positions to earn a vacant title challenger’s spot, and both are more than eager to finish the fight they started on February 27. With Vandam trailing a series of strike based victories, and Groenewald a renowned ground specialist, it will be a battle of wills as to where this bout plays out.

The evening’s main card kicks off with the debut of World Muay Thai, K1, and Chinese MMA champion Irshaad ‘White Tiger’ Sayed’s Hexagon debut. Born and raised in Cape Town Sayed is an Asian superstar finally getting the chance to compete professionally on African soil. In his way stands ‘King’ Leo Gloss, a legendary EFC AFRICA veteran. Gloss is known for blistering hand speed but meets his match against the internationally crafted skills of Sayed.

EFC AFRICA 28, presented by BetXchange.com, takes place on Thursday 27 March 2014 at the Coca-Cola Dome, Johannesburg. Tickets on sale now at www.computicket.com. Book your cinema ticket to all 13 fights live and in stunning HD at www.sterkinekor.com – available in Cape Town, Johannesburg and Durban. Watch the entire event live, from anywhere on the globe, via online streaming at efcafrica.tv.