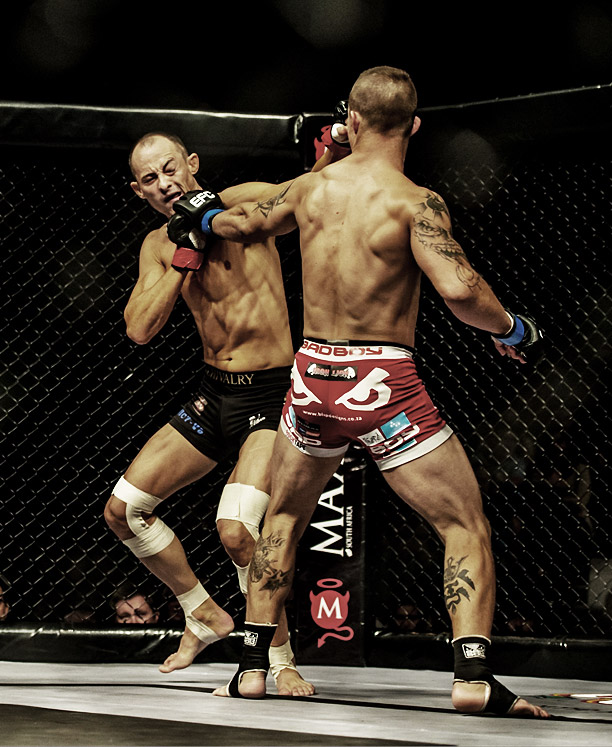 The bout between lightweight champion Leon Mynhardt and challenger Frederich Naumann had been billed as the ultimate showdown. Mynhardt entered the fight a tested legend of African MMA. In Naumann, however, he faced an opponent with an incredibly dynamic skillset. In 2013 Naumann had a dream debut year, winning a record four performance bonuses over four appearances. Tonight he was no match for Mynhardt. After immediately attacking with a series of kicks, Naumann was rocked by a right hand and four more punches that sent him reeling to the canvas. The 38 second knockout was Mynhardt’s quickest victory in the Hexagon, and another notch on the belt of an iconic athlete.

EFC AFRICA’s inaugural bantamweight bout was the spectacle many predicted. Former teammates Nkazimulo Zulu and Charlie Weyer engaged each other with fluid, sophisticated striking before Weyer scored a strong takedown. Zulu showed his grit however, working his way into full mount before putting Weyer away with ground and pound.

Donavin Hawkey against undefeated Dricus du Plessis was a classic veteran vs. young gun encounter. Hawkey entered the Hexagon with 32 professional MMA fights behind him. In contrast Du Plessis had only three, but also a world K1 title. The bout was aggressive from the start with Du Plessis taking Hawkey down early. The young man resisted both a guillotine and rear naked choke before forcing himself into top position, and finishing the legend with brutal elbows. Du Plessis is now pegged to fight for the middleweight title.

Fraser ‘The Omen’ Opie and Tumelo ‘The Truck’ Maphutha clashed at light heavyweight in a bout trailing huge hype. Opie, the current UK champion, decided to trade punches with Africa’s fastest knock-out record holder and paid for it. 4:43 into round one Opie verbally submitted. Afterward he revealed that Maphutha’s blows caused his vision to blur, forcing him to throw in the towel.

The night’s main card opened with a heavyweight matchup between the DRC’s Vandam Mbuyi and Cape Town’s Jiu-Jitsu expert Brendon Groenewald. The big men immediately careened to the fence and the clinch. Vandam delivered a knee that caught Groenewald in the groin, followed by another knee and a blow to the back of his head. Groenewald collapsed to the canvas. Referee Ian Pienaar immediately disqualified Mbuyi, to consternation from the crowd. EFC AFRICA president Cairo Howarth announced that the two would face each other again, as soon as possible.