No Time For Small Talk

Mynhardt brushes Naumann off ahead of EFC 27 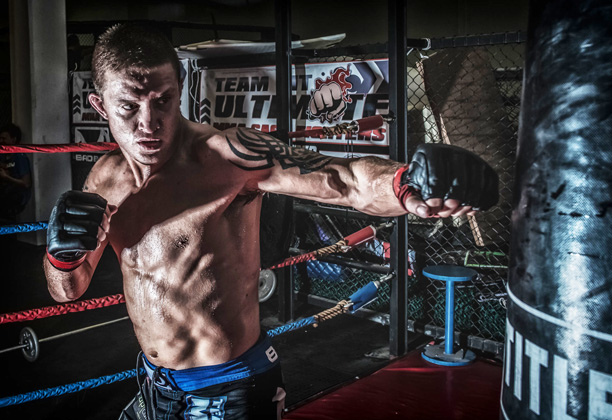 Johannesburg (South Africa) – Leon ‘Iron Lion’ Mynhardt is all business ahead of his first lightweight title defense on February 27. Here he takes time out to address some of the issues his opponent, Frederich ‘Ninja’ Naumann, recently raised about his game.

Naumann: My plan is to take him on, full-on toe-to-toe stand up. I’ve got the reach advantage, I believe I’ve got the speed advantage.

Mynhardt: Very good idea, but that’s just what he thinks, reality is still out there…

Naumann: My Jits is there. It’s a lot better than his. If he goes down I will finish him, that I can promise you.

Mynhardt: Who knows, the only way to see, is to come and try. I have focused a lot on my wrestling and grappling, and all round game and I’ve accomplished what I set out to do, that has made me a better person and improved my MMA a lot.

Naumann: The thing about Leon is if you let him fight off the front foot he’s going to damage you. If you pressure him there are holes in his game.

Mynhardt: I get a bit too relaxed and drop my hand sometimes because of all the times I’ve been in the cage, maybe it’s that you know… but no need to worry. Morne [Visser, coach] sorted that out for me.

Naumann: I believe Leon will keep it standing because he doesn’t have respect for my stand-up. I’ve heard him say that he thinks there are a lot of holes in my stand-up. I don’t think he wants to go down with me.

Mynhardt: I don’t believe only in my stand-up any more. I now focus on my whole arsenal, and use what I have learned to impose my will on my opponent.

Naumann: Leon doesn’t care how much damage he takes, he just wants to stand and bang. That’s all he knows, that’s what he’s going to do with me.

Mynhardt: Good one! I can promise you guys that I am ready for war and that’s what I’m going to create in that Hexagon on the 27th.

Naumann: It looks like he telegraphs his shots. You can see them coming because he wants to knock you out with every single punch.

Naumann: I’m going to finish the fight within two rounds. If I don’t drop him quickly I’m going to take him down and finish him.

Mynhardt: I don’t believe in predictions, it’s like gambling and I hate gambling. I don’t know if he can back his words with actions. We will have to see when he’s in the heat of war… Fred, good luck with training and see you at weigh-in. The best man will win.

Mynhardt to the fans: Guys, I wish you all the best experience at EFC 27. I hope to put on the best performance I possibly can. Now, back to training… Follow Leon on Facebook, Twitter and Instagram.