Two titles on the line at EFC AFRICA 27 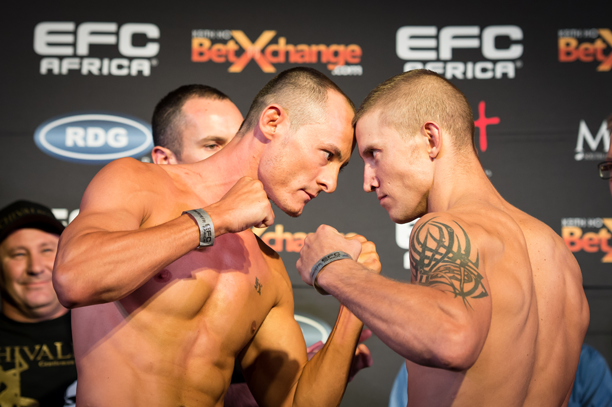 Johannesburg (South Africa) – The first EFC AFRICA event of 2014 kicked off with a bang at the official weigh-in at Carnival City today. 26 of the continent’s most dangerous combat athletes faced each other across the scale, in anticipation of a massively stacked card at tomorrow night’s event.

Frederich Naumann, the evening’s headlining lightweight title challenger, had the crowd screaming as he stood on the scale. Naumann is undefeated and the recipient of a record four performance of the night awards in 2013. He has vowed to finish the champion, Leon Mynhardt, in two rounds, and re-affirmed this today.

“I’m going to let the hands and feet go until the job is done,” he said.

“I don’t think talking works in a fight,” replied the champion a moment later, “prove it.”

Inaugural bantamweight contenders Nkazimulo Zulu and Charlie Weyer both hit their marks. Being former teammates they had a smile for each other at their face-off. Zulu had previously stated that he has no fear of Weyer, after dropping him in sparring on three occasions, which would have been on both of their minds.

The meeting of the legendary Donavin Hawkey, the most experienced athlete in the EFC AFRICA Hexagon, and the young former K1 world champion Dricus du Plessis, was a standout moment.

“Donavin is a legend, and this fight is going to make me a legend,” the young Du Plessis had stated previously. The man’s respect showed when he shook the veteran’s hand, as well as his intent when he refused to break the gaze of Hawkey.

The DRC’s monolith, Vandam Mbuyi, faces Cape Town’s Jiu-Jitsu expert Brendon Groenewald tomorrow night, a shot at the vacant heavyweight title his reward should he win. As always, the crowd went wild when the smiling, dangerous giant hit the scale.

Further down the card stand-out engagements were the hotly anticipated matchups between icons Gareth Buirski and Wesley Hawkey, the double debut of teammates Keron Davies and Mark Hulme, and the debut of popular Johannesburg bad boy Chaz Wasserman.