Sayed On His Debut 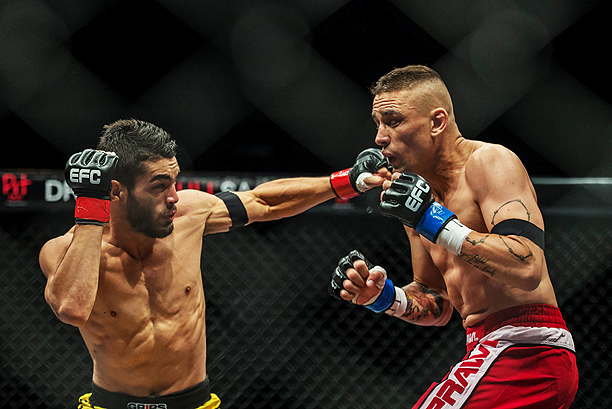 Irshaad Sayed sprung to prominence by winning the RUFF bantamweight belt and then donating a chunk of his prize money to build a school in China. But after this act of philanthropy, he was back to the normal business of being a fighter last week, returning to his native South Africa to compete at EFC 28.

Having consistently taken on the top fighters in China, it made a pleasant change for Sayed to find himself not fighting in hostile territory for once.

“It was a great experience. It’s nice to have support in the crowd but it adds a bit of pressure,” he said.

Having rocked Gloss with some surgically precise striking, Sayed decided to drop for a takedown and work for a submission, which he ultimately succeeded in getting.

It was a surprise to see a Muay Thai fighter electing to go to the ground when he seemed seconds away from potentially finishing the fight with strikes, but Sayed says it was indicative of how well rounded he has become. “My plan was actually to attack his legs with kicks then look for a takedown, so eventually I planned to take it to the ground, but I have seen Leo Gloss fight before and he can take a lot of damage, so I thought it would be easier to submit him while he was hurt,” he said.

There was some mild controversy when Gloss was given time to recover after Sayed seemed to clip him with a light heel to the groin while sinking his hooks in. The referee paused the fight before eventually resetting them in the original position, which ‘The White Tiger’ feels was the correct call.

“I actually used my heel to kick the inside of his thigh. He claimed it was a groin shot and the ref gave him up to five minutes to recover. I’m not 100 percent sure on the rules, but I was happy the ref put us back in the same position,” he said.

Sayed’s willingness to transition to the ground game makes him a much more dangerous proposition for prospective opponents, who already have enough on their plates worrying about the South African’s world class striking. He feels the improvement has coincided with a change of training camp last year.

“Since I joined Evolve MMA in Singapore, I have become a much more rounded fighter. We have a great coaching staff in all aspects of the game and I don’t want opponents to think of me as a striker anymore, I want to be viewed as an MMA fighter. Anytime you add another element to your game, it makes things harder for your opponents,” he said.

“I haven’t fought for over a year but I have been working hard at Evolve. I have definitely improved in leaps and bounds since joining because we have world champs in jiu-jitsu, wrestling, Muay Thai, boxing and MMA and we are constantly improving as individuals and as a team,” he said.

Sayed is penciled in for an appearance at EFC 30 on June 5th and has his sights firmly set on the organization’s bantamweight title which is currently the property of Nkazimulo Zulu.

“It’s always my goal to become champion and hopefully with another win or two I’ll be in line for a title shot. For me it will be the greatest success of my career, I was champion of China but being the champ in your home country is much more rewarding.”