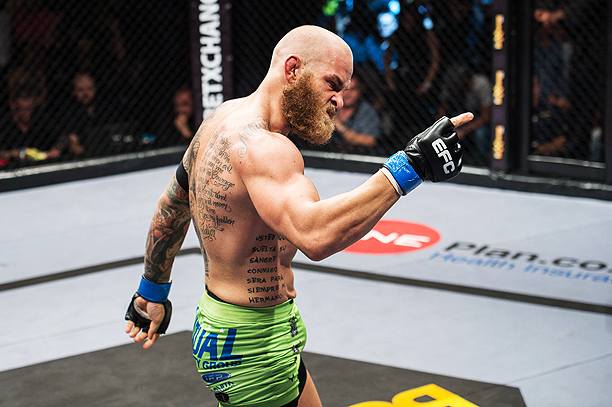 McLellan had stated before that nothing would separate him from his belt, and that he would put on a perfect performance to keep it. After weathering a combination of strikes from Kruger at the onset, McLellan calmly clinched and worked Kruger to the ground. There were tense moments when Kruger looked close to sinking an armbar, but those were short lived as McLellan took Kruger’s back, and sunk in a rear naked choke to take the victory.

Norman ‘Chef’ Wessels returned to the Hexagon after an absence of nearly two years in a massively anticipated bout against Cape Town’s Chris ‘Danger’ Du Pont. Chef entered the bout as the overwhelming odds favourite, and proved the prediction with a clinical display of MMA. Du Pont engaged early. Wessels pushed him up against the fence and landed a strong elbow to the face, before taking Du Pont down and, just as his teammate, submitting his opponent by rear naked choke.

After the bout, reigning light heavyweight champion Gideon Drotschie entered the Hexagon to face-off with the new challenger. Wessels was unable to control himself and engaged the champion, forcing EFC AFRICA officials to separate the two. Afterward Drotschie was brief in his response.

“If he thinks he just had a fight,” said the champion, “wait until he gets into the Hexagon with me.”

The legendary Bernardo Mikixi of Angola took a backseat to a new superstar. The DRC’s Christophe ‘Bomaye’ Walravens tore into Mikixi with continuous leg kicks in their heavyweight bout. Mikixi’s shin puffed up like a jellyfish at the damage, adding to Walravens’ clinical and patient counter strikes throughout the first two rounds. Walravens’ finally knocked Mikixi down, and forced a TKO from the man due to strikes.

Vandam Mbuyi and Brendon Groenewald had their rematch, and satisfied all with a Hexagon shaking heavyweight display. Groenewald was always on the back foot, the power of Mbuyi almost overwhelming, but maintained focus and forced the fight to the ground and his area of expertise. Taking Mbuyi’s back, Groenewald finally scored the win by tapout due to strikes in the second round. This victory signals a huge shift for Groenewald. With an up and down results list behind him, Groenewald showed a complete game ready to push any top heavyweight.

The night’s main card opened with the hugely anticipated debut of Cape Town born, Muay Thai world and Chinese MMA champion Irshaad Sayed. Johannesburg legend ‘King’ Leo Gloss faced him, and the bout was quick. Initially offering Sayed good competition in a punch exchange, Gloss was soon overwhelmed by Sayed’s superb all round game. After taking Gloss down the fight was stopped due to an unintentional groin strike by Sayed. After a controversial reset, Sayed sunk a rear naked choke and took the submission.

Standouts on the evening’s highly stacked prelim card were undoubtedly the hard fought war between wrestling champion Hanru Botha and former featherweight title contender Alain Ilunga. Both put on a scintillating display of back and forth MMA, the wrestler at times out striking the kick boxer, and the reverse.

Culverwell vs. Henderson, the final prelim bout of the evening, delivered both the fight and knock out of the night. Henderson was out performed by Culverwell’s superior power and conditioning, but did not give an inch until he was finally knocked down and out in the third round.

The submission of the night award went to Garreth McLellan for his rear naked choke victory, while Hanru Botha, Christophe Walravens and Bernardo Mikixi all took home performance bonuses.