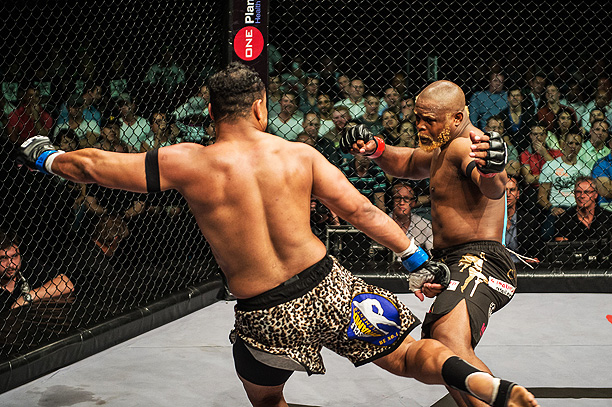 Gloss vs. Sayed, the main card opener, had some sections of the MMA community up in arms at a perceived incorrect reset on the part of the referee, after Sayed landed an unintentional groin strike on Gloss.

The second was the perceived incorrect stoppage in the Walravens vs. Mikixi encounter, where Walravens overwhelmed the ‘Black Panther’ with a hammer fist battering to score a verbal submission victory in the second round.

The third incident was in that same bout. During the break between the first and second rounds it was discovered that Walravens had extra padding underneath his right ankle guard, which was then removed at the referee’s request. EFC AFRICA president Cairo Howarth comments on all three incidents below:

“At the time I was surprised at the decision to reset Gloss and Sayed in their previous positions,” said Howarth, “mainly because it’s such a rare occurrence. I personally hadn’t seen something like that before and also wondered whether the ref had made the right call. I immediately discussed it with event officials and found that Ian [Pienaar – referee] acted perfectly within the situation. The rules state that if an unintentional foul is committed the referee must restart from the same position as before the fight was interrupted. I’ve had another look at the footage and it shows that Ian did it by the book. Well done to him.”

“The Walravens vs. Mikixi fight was awesome. Sitting Hexagon side, I had no feeling that the stoppage was handled improperly. It was heat of the moment, Walravens delivering standing hammer fist ground and pound, with Mikixi working for position to defend. Walravens was warned by referee Wiekus Swart to be careful of hitting the back of the head, who was monitoring the fight closely, and I felt he was reading the situation well. Bernardo rolled onto his back, a standard defensive position, and then verbally submitted, at which point Wiekus stopped the fight. In terms of the rules of MMA, I don’t see anything wrong with the stoppage. In fact, the first inkling anyone in the arena had that there may be something wrong was after sensationalism hit the internet – which says a lot about how difficult it is to judge reality on a single camera angle. Bernardo was examined immediately after and had no head injuries to speak of, and at the time was not personally concerned with the blows. We’ve re-watched the fight, and fans need to remember that ‘back of the head’ is a specific area. It’s a narrow strip, running down the centre of the back of the head. It’s not the whole area, from ear to ear. Walravens was angling his shots from the side, making every effort to avoid the danger zone, on a moving target.”

“What does stand out for me is the wearing of extra padding by Walravens underneath his ankle strapping. Unfortunately, the padding, which turned out to be standard soft bandages, was missed in pre-fight inspection as it was totally covered by his standard ankle guard. During the first round it became visible, and referee Swart took action as soon as possible. Some fans, including our commentators, speculated that it was hard Plaster of Paris, which is not correct – another example of sensationalism. The oversight was unfortunate; our aim is that it doesn’t happen again.”

“As the local and international MMA community is aware, there are set procedures that govern any complaint. The EFC officials have not yet received any formal complaint from either Gloss or MIkixi’s camp and therefore, at this stage, have nothing to take action on. Should a complaint be recorded procedure will be followed with an inquiry and ruling given within three working days.”

“On another note, how was that stare down between Wessels and Drotschie? Their bout in Cape Town, June 05, is going to be electric!”