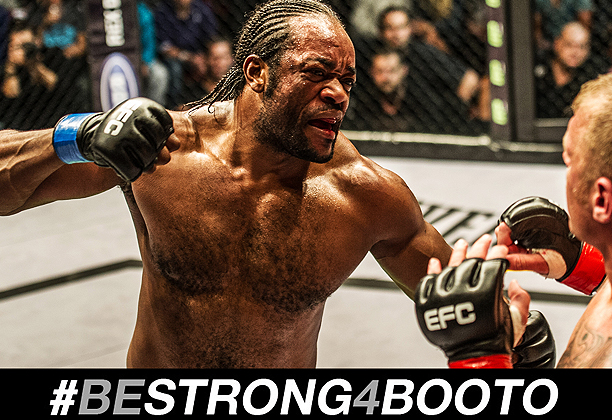 Mbuyi, in battle for the chance to challenge for the EFC AFRICA heavyweight title, landed an illegal groin strike on opponent Brendon Groenewald. Immediately afterward he launched a punch that caught the already dazed Groenewald on the back of the head, knocking him down.

Referee Ian Pienaar made the decision to disqualify Vandam. Pienaar had already called for a five minute recovery period for Groenewald and judged Vandam’s punch to be a double infringement; an illegal strike to the back of the head, and launched after the fight had been halted.

Chaos erupted. Vandam lost his composure, raging inside the Hexagon and backstage later. Only coach Brad Bloch was able to calm the big man down.

“Vandam’s behavior is unacceptable,” said EFC AFRICA president Cairo Howarth. “Our athletes must abide by the referee’s decision and remain professional. We have fined him 50% of his fight purse.”

Vandam has humbly accepted the decision and apologized to his opponent, to EFC AFRICA management and staff, event officials and fight fans the world over.

On the night Howarth stated that a rematch between Vandam and Groenewald will take place, and discussions are underway to confirm it for EFC AFRICA 28, March 27.

EFC AFRICA 28, presented by BetXchange.com, takes place on Thursday 27 March 2014 at the Coca-Cola Dome, Johannesburg. Tickets on sale now at www.computicket.com. Stream the entire event, live and in HD, from efcafrica.tv.