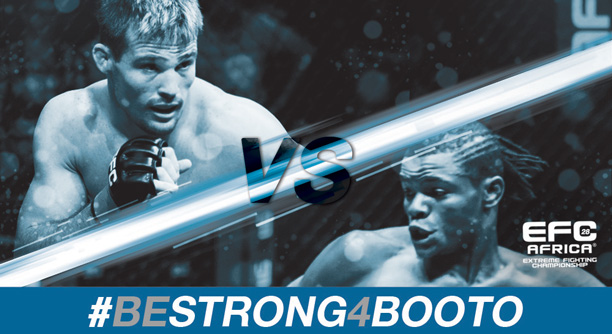 Johannesburg (South Africa) – The featherweight division swings back into the spotlight with the announcement of Hanru Botha vs. former title contender Alain Ilunga on March 27.

Botha, an African champion wrestler, is flying high with his recent knock out of Kanyeba Anicet, and the subsequent winning of 2013’s knock out of the year award. Botha knocked Anicet out cold with a short right hand, a first in the EFC AFRICA Hexagon, and afterwards said he was happy to have the chance to display his standup skills.

His standup ability will be useful against the devastating kicks of Ilunga. The DRC born athlete is still regarded as the most dangerous striker in the division after multiple TKO victories by body kick (Iakobidze, Calvert). He is also a man with a dangerous ground game, having taken high level scalps by submission (Taljaard, W. Hawkey).

Ilunga has suffered two losses on the trot, however. After a blistering run to the title where he was beaten by former champion Demarte Pena by decision, he lost out to Peter Nyide who was simply unbeatable on the night. Having now settled into a new camp, and with his history of brutal, focused performances, Ilunga is angry, and poised to rediscover his instinctive style.

Botha vs. Ilunga promises intense action standing, in the clinch, or on the ground. Can the wrestler exist with the feared striker while standing? Does the striker have the know-how to defend against a champion that has been wrestling since the age of four? On March 27 all questions are answered.

EFC AFRICA 28, presented by BetXchange.com, takes place on Thursday 27 March 2014 at the Coca-Cola Dome, Johannesburg. Tickets on sale soon at www.computicket.com. Stream the entire event, live and in HD, from efcafrica.tv.