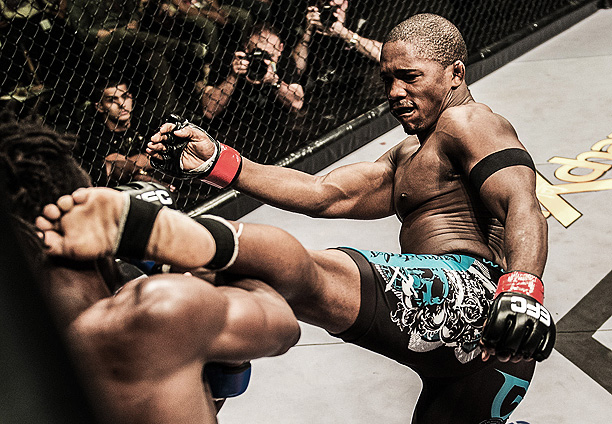 Johannesburg (South Africa) – Peter Nyide is on the rise. Coming off of a spectacular win against former title contender Alain Ilunga, he is primed to take his output a step higher when he clashes with Johannesburg’s Gareth Buirski on May 01.

Nyide’s current form is the result of unrelenting hard work, talent, and an insistence on being as good as he is despite very tough setbacks.

He made his debut against former title lightweight contender Frederich Naumann on short notice, and at a weight class above his own. In his first round submission loss he learned a valuable lesson and has not been finished since.

At his second outing he displayed incredible courage. He broke both his hands on the face of Markus Taljaard but refused to give in, instead fighting all the way to a decision loss and a fight of the night bonus.

At EFC AFRICA 23, against the African and Commonwealth champion wrestling pedigree of Hanru Botha, Nyide once again put in the fight of his life. He battled the wrestler at his own ground game, and while outclassed there added another layer of iron grit. Again he fought to a decision.

Without a win and three losses down Nyide jumped at the chance to face the hugely rated Alain Ilunga, then the most dangerous striker in the featherweight division. It was as if all the bitter losses that had come before settled into a determination that had no fault lines.

Nyide charged into the bout with a level of technical prowess and brutal intent that had spectators taking notice from the first buzzer to the last. He smashed Ilunga in all areas with constant pressure, giving the DRC native the kind of beating he is used to dishing out.

Gareth Buirski is very experienced with big wins behind him. Coming off of two losses and with a legacy to defend he will throw everything at Nyide. The task will be supreme, however, as Nyide has found the only thing that was missing from his arsenal; a taste for winning.

Nyide vs. G. Buirski takes place on the EFC AFRICA 29 prelim card, and can only be seen live at the venue, live and in HD at selected www.sterkinekor.com cinemas throughout South Africa, or streamed online at www.efcworldwide.com/efc_africa_404.php.

EFC AFRICA 29, presented by BetXchange.com, takes place on Thursday 01 May 2014 at the Carnival City Big Top Arena, Johannesburg. Tickets on sale now at www.computicket.com. Book your cinema ticket to all 13 fights live and in stunning HD at www.sterkinekor.com. Watch the entire event live, from anywhere on the globe, via online streaming at efcworldwide.com/efc_africa_404.php.