“I’m Going To Fight My Fight” 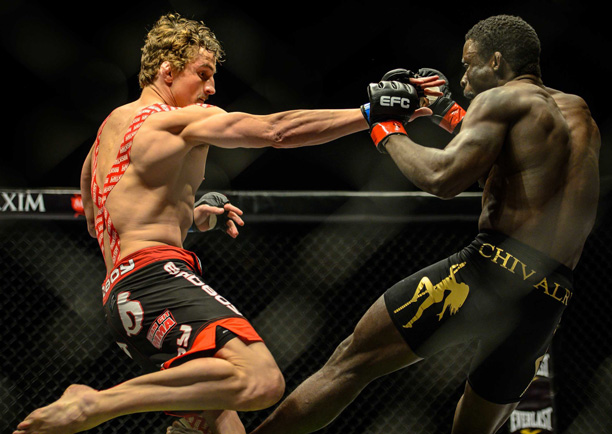 Take us through deciding to fight at middleweight. Was it a sudden decision, or had you been thinking about it for a while?

I had been considering it for a while. I have to cut a lot of weight to get down to welterweight, which does have an effect on my performance. I reckon it’s going to make a big difference come fight night.

So you think fighting heavier will up your performance?

I think so. I can eat a lot more during training camp and be more relaxed leading into the fight. No sauna or salt baths more me this time! Middle is more my natural weight. I will still have to cut a little bit, but not 10kg anymore.

Did you ever think you’d take on Smith? Was there ever the possibility of fighting him before EFC AFRICA?

No, never, which is awesome! I’m super exited to be taking on the challenge.

You’ve fought at many weights in the past. Will you be comfortable at middle?

What’s your analysis of Smith’s style?

He has been around the block. He is a good fighter.

Where’s the best place to take him on? His only two losses have happened on the ground.

I’m going to fight my fight. It’s difficult to say where it will go. Both of us have strong points.

Smith has big power and loves his body shots. Is the clinch something you’d be looking to avoid?

Like I said previously it is very difficult to predict where it might go. If we end up in any position it is up to me to make it count in my favor.

What are you most excited for about this fight?

To fight! It is what I love to do.

Finally, you’ve fought Dino and Fadipe. Who’s taking that fight, and how?

I think if Dino keeps his wits about him, he’ll take it on points.