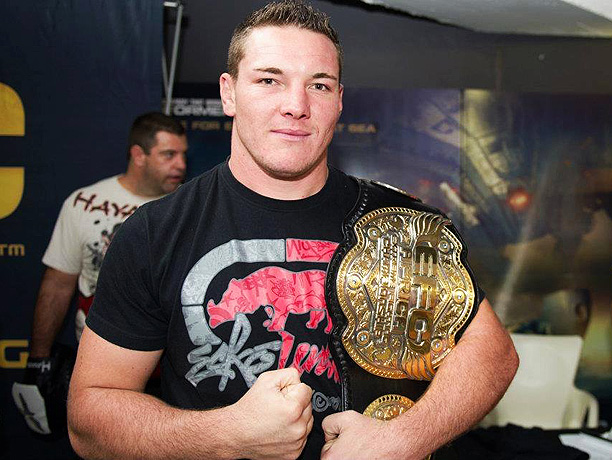 Back in April 2012 Drotschie was still an amateur athlete grinding away towards earning an EFC AFRICA contract, never mind the title. In that month EFC AFRICA hit Cape Town for the first time, and Drotschie made sure he was there to meet the EFC AFRICA team.

“EFC AFRICA was having a media event to promote EFC AFRICA 13,” said Drotschie. “A friend of mine was going to take photos and asked me if I’d like to go along and help out. I made sure that I met Cairo [Howarth, EFC AFRICA president], and I told him he should remember my name.

Drotschie poses with the EFC AFRICA belt, a year before he won the title

“I remember that Don Madge was fighting Leon Mynhardt for the first time at that event. All I wanted was to be a part of it,” he continued. “Ruan Potts was at the media day. It’s his belt in the picture that I got taken of myself.”

Drotschie was true to his vision and his word. In November of that year he made his EFC AFRICA debut, and just over a year later he clinched the light heavyweight title.

On June 05 Drotschie comes full circle. Instead of watching Madge battle from the stands he’ll be in action, and this time headlining the event.

“I’m training hard for June,” said Drotschie, “I can’t wait for the event. To defend my belt in my home town, against a former champion… Ja, it’s a dream come true.”

EFC AFRICA 30, presented by BetXchange.com, takes place on Thursday 05 June 2014 at the GrandWest Grand Arena, Cape Town. Tickets on sale soon at www.computicket.com. Book your cinema ticket to all 13 fights live and in HD at www.sterkinekor.com. Watch the entire event live, from anywhere on the globe, via online streaming at efcafrica.tv.