Saxon is 14-0, and just getting started 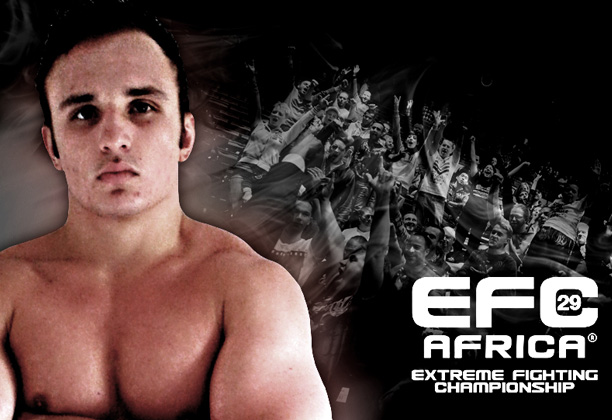 Delafield’s current record is no surprise. The son of Durban MMA and Kickboxing trainer Mark Delafied, Saxon has been immersed in the martial arts since before he can remember.

“I followed my Dad into it,” said Delafield, “he was a professional fighter at the time.”

Apart from Delafield’s 14 straight victories, he enters the Hexagon with a massive kickboxing record of 68-6, as well as two amateur MMA titles and the South African amateur MMA welterweight title.

His fight name, the ‘One Minute Monster’, is a further clue to his impressive talents.

Of course there is a vast difference between the amateur and the professional arena, something his opponent Coxen knows well.

Coxen made his own EFC AFRICA debut with a brilliant knock out of the night over Nigeria’s Steven Momah, but thereafter stumbled against the ferocious attack of Cape Town’s Sibusiso Mdoko. He will be bringing all of his hard won, big stage experience to facing the young prodigy.

Coxen vs. Delafield takes place on the EFC AFRICA 29 prelim card, and can only be seen live at the venue, live and in stunning HD at selected www.sterkinekor.com cinemas throughout South Africa, or streamed online at www.efcafrica.tv.