Madge vs. Allen, plus 11 more explosive fights at EFC AFRICA 30 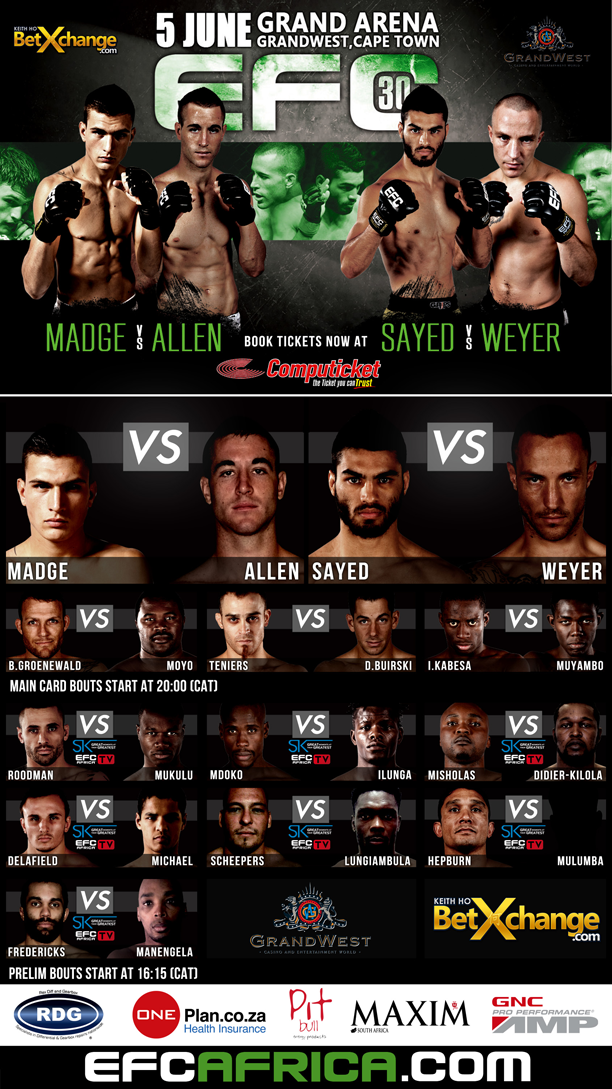 Madge vs. Allen has already been dubbed a ‘superfight’. Taking place at a catch weight of 69kg, the featherweight Allen is undefeated in the EFC AFRICA Hexagon, and is yet to lose a round. Madge is fired up after losing the chance to reclaim his lightweight belt due to an injury to the champion, Leon Mynhardt, and has vowed to bring his home town fans a piece of the beast he is famous for. Scheduled for five rounds, this meeting of two divisions is a once in a lifetime battle between two men at the very top of their game.

World Muay Thai and Chinese MMA champion Irshaad Sayed fights at home for the first time, after leaving Cape Town at the age of 17. He faces Johannesburg’s Charlie ‘Silky Smooth’ Weyer, the man with lightning hands and the all-round game prepped to pressure Sayed wherever the fight takes them. Sayed displayed searing skills against Leo Gloss in his EFC AFRICA debut. What’s next for the man currently training out of Singapore?

Zimbabwe’s Elvis ‘The Bomber’ Moyo is already Africa’s boxing heavyweight champion. He goes head to head with Cape Town’s ground maestro Brendon Groenewald, in a top of the table clash that nets the winner a berth against Christophe Walravens, and a shot at the vacant title. This is a classic style vs. style matchup. Moyo has proven his devastating punching power, but will he be able to resist the man that pushed Vandam Mbuyi to tap out on the ground?

Cape Town’s Marcel Teniers is a dogged and powerful athlete who attempts to go 3-0 against Johannesburg’s highly experienced David Buirski. Both men operate off of similar, high powered, close quarter wrestling bases. Each is an artist in the ground and pound department, and both possess cardio reserves to pump the action from start to finish. Expect a battle of attrition when these two meet.

Regis Muyambo is a proud (and recent) Wynberg Boys High School old boy. He fights for his Mother City in a near grudge match against multiple SA wrestling champion Igeu Kabesa. Muyambo is undefeated and looking for a third straight win. In his last outing he dominated Igeu’s brother, Texier (also an SA wrestling champ), priming Igeu for a slice of payback. Whoever wins this main card opening bout will take a huge step up in competition.