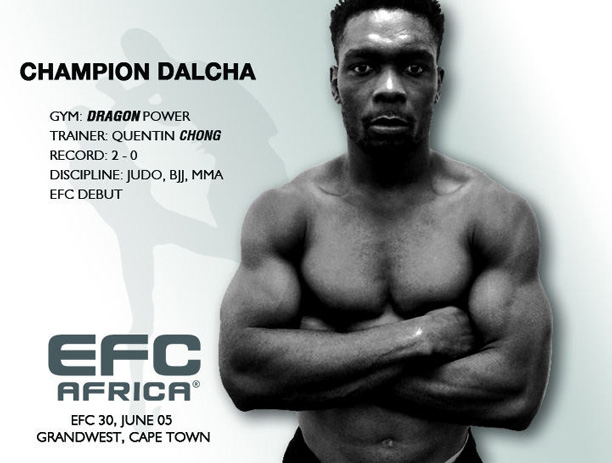 Johannesburg (South Africa) – Team Dragon Power have put their second EFC 30 entrant on the card with the announcement that ‘Champion’ Dalcha will make his Hexagon debut on June 05.

‘This is a dream come true!” said Dalcha. “I have been doing Martial Arts for 20 years, finally I enter the Hexagon.”

28 year old Dalcha, originally from the DRC, began his career in martial arts with Judo at the age of eight. A move to Cape Town as a young man and involvement in Brazilian Jiu-Jitsu followed, where he has won numerous medals on the local and international stage.

He made the transition to Mixed Martial Arts in 2010, immediately debuting as a professional, and has two wins under his belt.

“This is an athlete that is going to go places in the world of MMA,” said one of Dalcha’s trainers, Lester Lombard. “He is a very humble person. If he’s not at home he’s training. He does not allow any distractions to creep in to reaching his dream. He is a true ambassador to the sport for Africa on the world arena, and will make a great mentor to youth of MMA and Martial Arts.”

On June 05 Dalcha goes up against the immensely powerful Roelof Scheepers, who is making the drop to light heavyweight for the first time. Scheepers will be maximizing his strength at the lower weight class, meaning Dalcha will need all his technique to best the bigger man.

“He must be ready because I am ready,” said Dalcha of his opponent. “My goal is to enjoy my fight.”