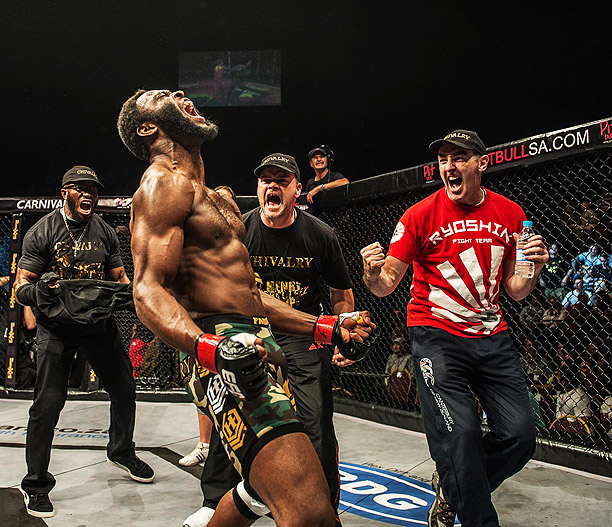 Johannesburg (South Africa) – An unforgettable double milestone was set at Carnival City last night, when Nigeria’s Henry ‘Herculeez’ Fadipe, fighting out of Ireland, won both countries their first ever EFC AFRICA championship belt. Fadipe took the title from Dino ‘The Lion’ Bagattin in a thrilling one round contest.

The bout had seen a huge amount of hype in the lead up. General sentiment focused on the superior speed and conditioning of Bagattin, versus the raw knock out power of Fadipe. Proceedings went as predicted when Bagattin came out firing and tagged Fadipe with both leg kicks and punches, weaving out of range, before finally engaging too eagerly and dropping to a straight right delivered by ‘Herculeez’.

Fadipe’s win continues the mythical ‘curse’ of the welterweight belt, under which the title has never been successfully defended.

“My advice to any welterweight with a dream… Change divisions.” said Fadipe after, clearly intending to break it.

A shot at the vacant featherweight title was on the line when Brendon Katz and Barend Nienaber met. Katz was confident before, inviting Nienaber to “choose the way you lose this fight” in a promotional video. It was not to be. Nienaber had identified Katz’s strength as a striker, and nullified it with a consummate ground game. He fought clinically for three rounds, and took the victory with ease.

Afterward number one contender Boyd Allen entered the Hexagon, and put a warning out to Nienaber. “If he thinks he’s going to fight me like that and keep me down for five rounds, he’s got another thing coming.”

Nienaber will face Allen for the title at EFC AFRICA 31, on 03 July.

Jeremy Smith and Michiel Opperman are both former champions, and fought like it. Opperman surprised all with a dominant performance in the first round, besting Smith in the clinch and cutting him with an elbow. The second saw Smith finding his brutal boxing groove by scoring big body shots. The third round had each with all to play for, and it seemed that Smith was edging the points with superior boxing, until Opperman knocked him down with a massive knee to the head. Opperman took the fight by split decision with the knee knock down no doubt making the difference. This fight was later named fight of the night.

Alex Cheboub versus Wade Groth was expected to be a showstopper. Cheboub immediately launched his well-known unorthodox attacking style, which Groth weathered and replied to with pinpoint strikes. The crowd were on their feet when Cheboub landed a stunning spinning back kick. They stayed there as Groth responded with a monster overhand right that dropped Cheboub. Many disagreed with the decision, Cheboub protesting that he was able to fight on, but the TKO had already been called.

Starting the evening’s main card was the clash between Durban’s God of War, Peter Nyide, and Johannesburg legend Gareth Buirski. Nyide came in hard, quickly working Buirski to the ground and smothering him there. It seemed that Nyide would take the round with superior control, when Buirski suddenly launched a blizzard of elbows to Nyide’s head from the bottom. A stunned Nyide prompted the referee to stop the fight.

The night’s prelim card was owned by its debutants. Tyson Chelin, Saxon Delafield and Gordon Roodman all entered the Hexagon for the first time, and all brought the house down with massive performances.

Chelin totally outclassed Mbulelo Swekile in three rounds of hard fighting. Delafield scored with a lethal rush that put Coxen down and had him submitted in a blistering 31 seconds. Roodman blitzed Pupanga Tresor with big punches and a granite armbar, that put his DRC born opponent away.