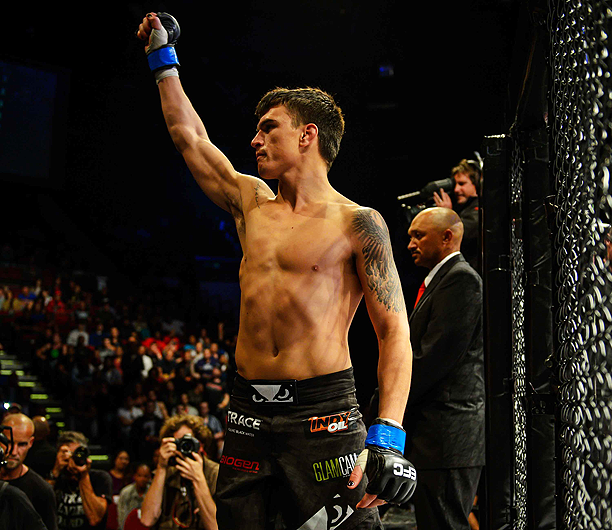 Johannesburg (South Africa) – EFC AFRICA superstar Don ‘Magic Man’ Madge has had a wild ride since taking to the sport of MMA only three years ago. Today he sits at the top of Africa’s lightweight division. Ahead of his fan dubbed ‘superfight’ against Boyd Allen on June 05, Madge took time to reflect on his career so far.

“At first I vowed I’d never do MMA,” said Madge, speaking of the explosion of MMA in Africa with the rise of EFC AFRICA in 2010. “I was ignorant. I thought guys were just going in there swinging, they had no style. But then I started cross-training, doing a bit of Brazilian Jiu-Jitsu, messing around, and I realised what a challenge it was, and how big the world was that I could get into.”

“As a Muay Thai athlete I was ranked second in the world but struggled to make ends meet,” said Madge. “My MMA career, on the platform that EFC AFRICA has created, has allowed me and other African athletes to achieve our dreams. With EFC broadcast in millions of homes worldwide, I’m a recognised figure now. I was recently photographed for a Men’s Health cover, it’s awesome! I have incredible sponsors behind me that allow me to practise my sport full time, that’s a massive gift for an MMA athlete anywhere, but particularly in Africa. Where I am is leading me to where I want to be – the best in the world and someone who is able to give back to the sport that’s made him.”

Madge reaches a milestone on June 05, both personally and professionally. “This fight against Boyd is a big one,” he said. “He’s an incredible athlete that’s moving out of his weight division to fight me. As a dedicated mixed martial artist I couldn’t ask for anything more than to be able to fight the best. More than that, though, is the fact that I get to fight him in Cape Town, my city, my home, in front of my fans.”

“Cape Town means the world to me,” he continued. “I fought that first fight against Leon here, the fight that made my name across the globe. I defended my belt here, and fought the complete, technical fight of a true mixed martial artist. I don’t agree with the judges’ decision in that fight, and everyone knows it. My fans know who I am and where the champion’s belt should be. In two weeks I get to fight Boyd in Cape Town, and show them who I am and what anyone is capable of, if given the chance.”

“I wouldn’t be the athlete I am without the people that put the time in to help me,” Madge concluded. “Today I am one of those people. I’m helping others improve in the sport that has given me a fantastic career. I’m literally living my dream.”