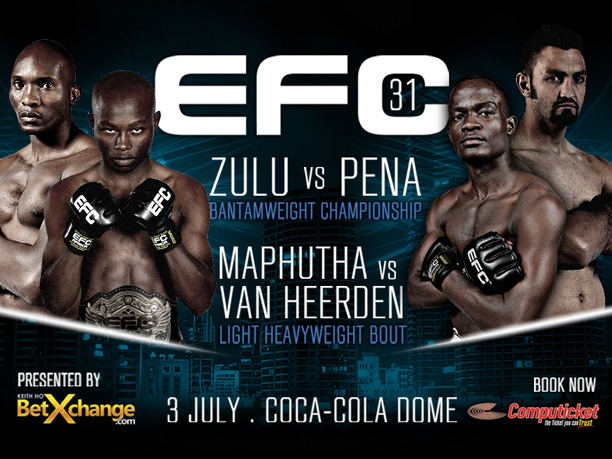 Johannesburg (South Africa) – Tickets to the EFC 31 event, featuring the bantamweight title fight between the most dominant athlete in EFC history, Demarte Pena, and bantamweight champion Nkazimulo Zulu, are on sale now.

Pena is the former featherweight champion who relinquished his belt for a shot at history. Should he beat Zulu, an athlete with a dizzying arsenal of devastating strikes, he will be the first man to hold a belt in two different weight divisions.

The fearsome Tumelo Maphutha returns to the Hexagon to face former title contender Danie ‘Pitbull’ van Heerden at light heavyweight. Nicknamed ‘The Truck’, Maphutha has dropped the continent’s toughest with his brutal punches. Will he do the same to the legendary Van Heerden?

Former heavyweight champion Andrew ‘One Gear’ van Zyl makes his long awaited comeback on July 3. A man widely regarded as the most dangerous in the division, this will be the start of his trail to take the belt that was once his.
EFC 31 presents 13 explosive fights. Full fightcard details at www.efcafrica.com.