History In The Making

Pena shoots for immortality on July 03 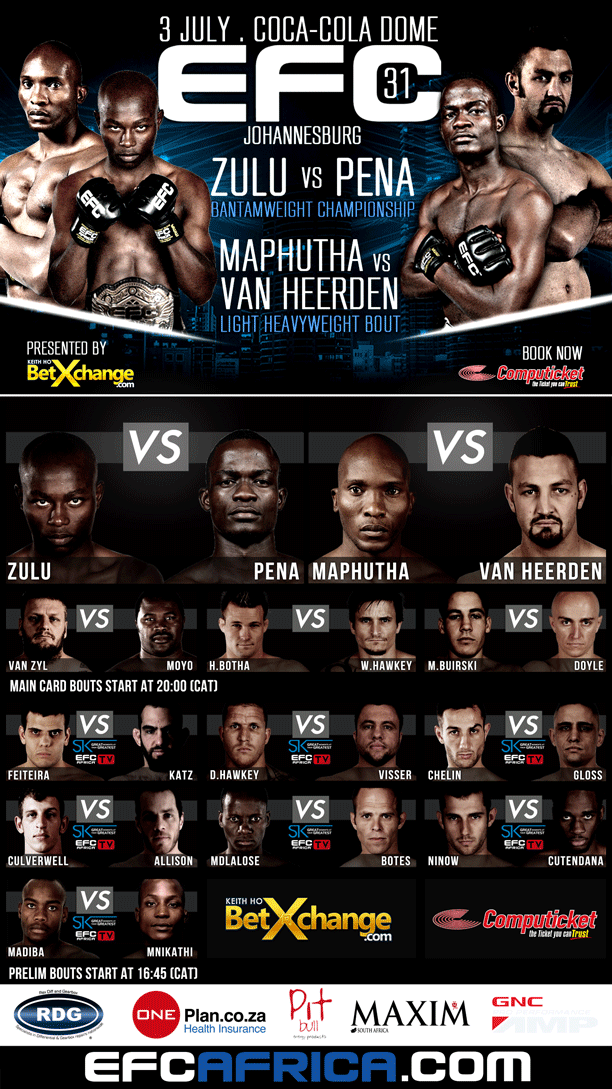 Johannesburg (South Africa) – Johannesburg’s the Coca-Cola Dome is set for an explosive night of fights when champion Nkazimulo ‘Zuluboy’ Zulu and former featherweight champion Demarte ‘The Wolf’ Pena square off for the bantamweight title.

Zulu is a sensational striker that fought his way to the top with a series of unforgettable performances. He knocked Lourens Botes out cold, devastated Craig Ninow with a brutal head kick that was heard around the world, and scored a first round TKO to take the title against Charlie Weyer. His opponent, Demarte Pena, is without question his toughest test.

Pena is the most dominant athlete in EFC’s history. His run at featherweight included a staggering eight fight, undefeated win streak, a record breaking five title defenses, and the honour of being the youngest EFC champion in history. In a controversial move late last year, he relinquished his featherweight belt for a guaranteed shot at the bantamweight title. If he beats Zulu he will become the first EFC athlete to own a title in two weight divisions.

“Losing is not a concern for me,” said Pena. “I’ve proven that I am a true champion by being the only man in EFC history that has been able to defend the belt five times. I understand that anything worth having in life comes with a price.”

Both Maphutha and Van Heerden are notoriously powerful, totally unafraid, and have the same uncompromising style of straight attack until the final buzzer. Maphutha has smashed men like McLellan, Kruger and Opie with his incredibly heavy hands, and Van Heerden has made it known that he wants nothing more than to test his phenomenal boxing pedigree against that kind of onslaught. Their main event bout has sparked huge global interest, and promises to be a brutal festival of stand-up MMA.

Former heavyweight champion Andrew van Zyl reignites his title trail with a tough test against Africa’s heavyweight boxing champion Elvis ‘The Bomber’ Moyo. Van Zyl is well aware of the steamer from Zimbabwe’s KO power, and has said that he will be playing a concentrated game when they meet in the Hexagon.

“Moyo’s going to have clean KO power going all the time,” he said. “The pressure’s on me, here. He probably only needs one good punch to end it, which means I won’t be making any mistakes. It’s up to me to set the tone of this fight, and take it where I want it.”

African wrestling champion Hanru Botha has put in extraordinary performances to earn this top division bout. He is now riding a three fight win streak, and if he beats Hawkey, may find himself next in line to challenge for the title. Hawkey is a perennial top contender, however, and poses a unique threat. Coming off of a classic striking based win over G. Buirski, he is in the form that made him a legend, and more dangerous than ever.

Should Hawkey put a stop to Botha’s winning run he will find himself back in the division’s upper reaches, and that much closer to a rematch with current number one contender Boyd Allen. A similar prize awaits Botha if he wins, Allen being the only athlete he has lost to as a professional.

Buirski and Doyle are powerful competitors both driving hard to stake a claim for a bantamweight title shot. With Doyle sitting on a three fight winning streak, all finishes inside the first two rounds, and Buirski still undefeated in the Hexagon, for both their meeting on July 03 is a reckoning. It is against each other that their ability to compete at the top of the division will be revealed.