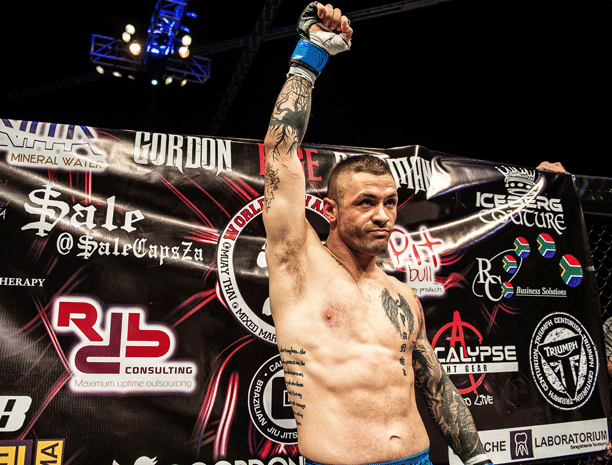 Johannesburg (South Africa) – Johannesburg’s Gordon ‘Rage’ Roodman hits the EFC main card for the first time on August 07, a reward for years of hard work by one of MMA’s most dedicated disciples.

“Hitting the main card for the first time is literally a dream come true,” said Roodman. “I’ve been working towards fighting for EFC for so long, to now go out live across the globe, doing what I love, and in front of my home town crowd, I couldn’t ask for more.”

Roodman is known as much for his entertaining antics as his all or nothing fighting style. Against Cape Town’s Shaun de Lange he gets the chance to let it all go, as De Lange has proved with his last performance that he is a man on the rise, and extremely dangerous.

De Lange, grabbed the world’s attention on June 05 this year, against the massively rated and undefeated Saxon Delafield. Pre-fight odds were all Delafield, until De Lange smashed him with aggression and technique that sent Delafield spinning all over the Hexagon.

Delafield had no answer for De Lange’s overwhelming all round game, and Roodman will be watching footage of that fight closely.

Roodman and De Lange are athletes that seek out the toughest area of the fight and make that their home. When they meet there will be no holding back, wherever the fight goes.