Face-to-face on the champ’s home turf 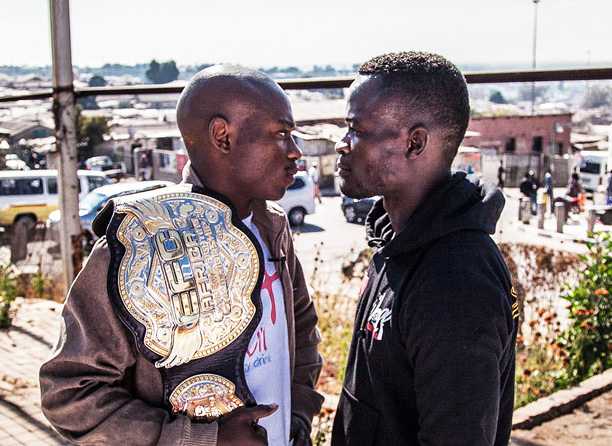 Zulu and Pena faced off in Alexandra, Johannesburg

Johannesburg (South Africa) – On Sunday the Zulu champion Nkazimulo ‘Zuluboy’ Zulu met face-to-face with the Angolan challenger Demarte ‘The Wolf’ Pena in Alexandra, Johannesburg. After a heated week of words between the two they met on the champ’s home turf for final interviews, training demonstrations, and a face-off ahead of their title bout this Thursday.

Both athletes arrived bristling with tension. In the week before the champion had accused the challenger of not showing proper respect, and had reminded him that they had fought before at amateur level, where Zulu contends he knocked Pena out in the second round.

When both men faced off tension boiled over. Zulu again reminded Pena of the knockout, and added he would be teaching him respect when they entered the Hexagon on Thursday. Pena charged forward when asked to face off, getting in the face of the champion, both dangerously close to coming to blows.

“Do you know what a knock out is?” asked the challenger. “It’s when your brain bounces against your skull and you drop. That never happened. But it will on Thursday.”

Both were locked in an intense stare, perhaps only the presence of media keeping them apart, until EFC president Cairo Howarth finally got them to separate.

“I am going to destroy him,” said Pena after. “He’s forgotten who he’s talking to. I defended my featherweight belt a record five times, he hasn’t had one successful defense yet. He’s digging himself an early grave.”

“He doesn’t know what’s coming,” said the champion. “I am going to put him down with knees, kicks and elbows, just like I did last time. He’s come down to my weight division. He’s lost his power now. He has no idea what I’m going to do to him.”

Zulu and Pena will hit the scales and face-off on Wednesday, July 02, live at the EFC 31 weigh-in event. All are welcome at the Coca-Cola Dome, Johannesburg, 14h00.