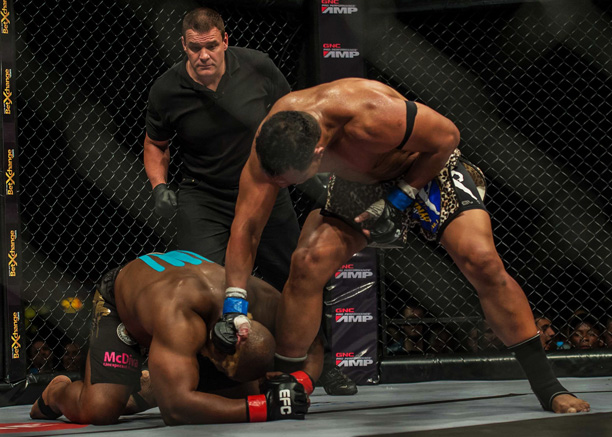 Johannesburg (South Africa) – The event officials’ final ruling on the EFC 28 bout between Christophe Walravens and Bernardo Mikixi has been released.

Taking place on March 27, the bout took a controversial turn when extra bandaging was discovered beneath Walravens’ ankle guard during the fight, and when questions around the legality of a final series of strikes to Mikixi’s head were questioned afterward.

In an inquiry conducted immediately afterward event officials found that the padding used by Walravens was illegal, as well as an amount of Thai oil used. Based on this infringement event officials ruled the bout a ‘no contest’, and handed down a six month suspension to Walravens.

The matter of the legality of the head strikes was not ruled on, as the officials requested more time to review the footage. That review has now been completed, and the findings are as follows:

They supply the following summation concerning the extra bandaging, Thai oil, and strikes in question:

“Even though the officials would like to believe that Walravens did not intentionally break the rules, the facts are that two rules were broken and should result in a disqualification and six month suspension. However, we failed to disqualify him on the night leaving us with no option other than calling the bout a No Contest and enforcing the six month suspension.

The officials are there to enforce the rules and fighters safety. The officials need to be consistent and eliminate interpretation as much as possible. This was not a decision the officials took lightly, but as officials do believe it’s the right one.”