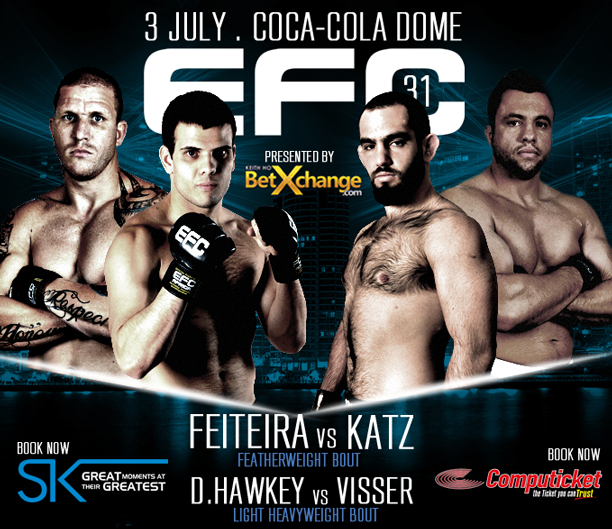 Young gun Nelson ‘No Tap’ Feiteira takes on the massively experienced Brendon Katz, and the legendary Donavin ‘Bam Bamz’ Hawkey moves up to light heavyweight for a showdown with debutant to the division Ian Visser.

The undefeated Feiteira has carved an iron reputation for hard fighting and big heart in the EFC Hexagon. Dubbed ‘No Tap’ as an amateur he proved why it’s nearly impossible to put him away by withstanding multiple, high level submission attempts and smashing his way to a points win at EFC 26.

His victory there, coupled with his first round demolition of the Kanyeba Anicet on his debut, has cemented him as the toughest of the younger generation in the featherweight pool, and garnered him the nod to step up.

Katz is internationally experienced and renowned for brutal, bloody wars. With a pro MMA record of 6-3, and coming off of a shock loss in a title eliminator decider at EFC 29, he is highly motivated to return to the ruthless style that made him famous.

Hawkey’s move up to light heavyweight has caused a wave of excitement across the globe. Having spent the bulk of his career at middleweight, Hawkey has decided to make the move based on maximising the considerable amount of power he puts into his punches.

“I’m excited about moving up,” said Hawkey. “I’ve always had to sacrifice power when competing at middleweight. In this bigger division I’ll be continuing my strength training, and competing with bigger, stronger opponents. I can’t wait.”

The #EFCBigScreen viewing experience has been hailed as a revolution in live sports broadcasting, with fans able to enjoy every single fight live, in massive HD, while enveloped by superb Dolby Surround Sound.

“Watching EFC at Ster-Kinekor is awesome,” said EFC president Cairo Howarth. “The amount of detail in sound and picture is just mind blowing.”

The EFC 31 Ster-Kinekor bouts are exclusively available on the #EFCBigScreen experience at selected Ster-Kinekor cinemas throughout South Africa, and via online streaming at www.efcworldwide.com/efc_africa_404.php.