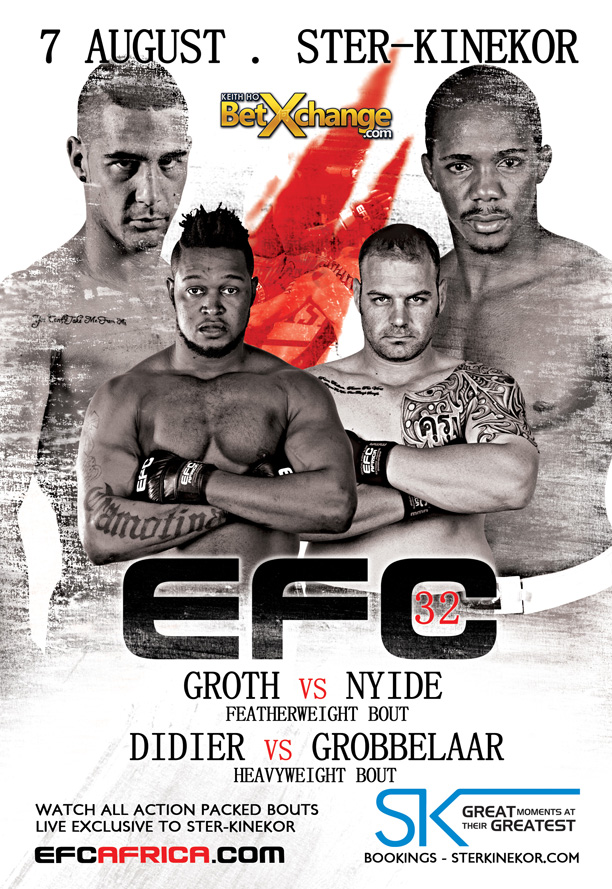 Groth last faced ‘The Professor’, Alex Cheboub, and had the world talking with a overwhelming display. Composed, crisp, and devastatingly effective he took the fight to Cheboub, finally scoring a KO off of an unforgettable superman punch launched off of the fence.

Nyide is perhaps the toughest athlete on the EFC roster. Known for going three rounds with two broken hands in a fight of the night performance (Markus Taljaard), and for demolishing former lightweight title contender Alain Ilunga, he is a warrior with a skill-set evolving at a scary pace.

Dubbed ‘the Guru’, Sors Grobbelaar is a potent kickboxer renowned for accurate, punishing strikes that have rocked and dropped Africa’s heaviest. Coming off of a decision loss that was closer than close (Elvis Moyo), the George native is now committed to finishing his fights at any cost.

The DRC’s ‘Knife’ Didier-Kilola has only made one EFC appearance so far, and rocked the world while doing it. Pitted against the vastly experienced Ricky ‘Apocalypse’ Misholas, ‘Knife’ showed no respect for the legend. He challenged him with a clash of heads at their weigh-in, and put in a brutal attack from the buzzer on fight night, knocking Misholas down and out in the first round.

“The Ster-Kinekor cinema experience is awesome,” said EFC President Cairo Howarth. “We’ve chosen these athletes to headline the Ster-Kinekor Prelims because the level of energy and performance they bring will be absolutely phenomenal on the big screen. These bouts are not scheduled for television broadcast, so if you can’t make it to Carnival City, you’ve got to get to a cinema near you to not miss the action.”

In addition, fight fans flocking to cinemas on 7 August get access to the entire EFC 32 event. One ticket gives you all access to every single fight.

The EFC 32 Ster-Kinekor Prelim Bouts are exclusively available on the #EFCBigScreen experience at selected Ster-Kinekor cinemas throughout South Africa, and via online and mobile streaming at www.efcworldwide.com/efc_africa_404.php. Tickets are on sale now at SterKinekor.com.