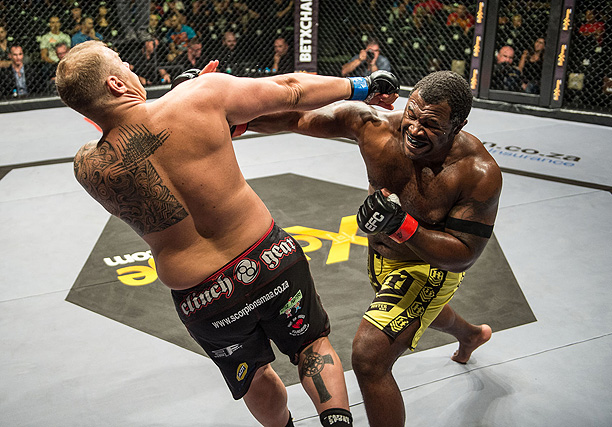 Johannesburg (South Africa) – The heavyweight showdown between the power punching Elvis ‘The Bomber’ Moyo and gritty veteran Wilhelm ‘Tiny’ Strauss, has been moved up to the EFC 32 main card following a fight card shuffle today.

“Stylistically, Elvis and Tiny are going to be bringing fans an absolute cracker of a fight,” said EFC matchmaker Graeme Cartmell. “Both have knock out power and love to mix it up. We’ve been looking at the last open slot on the live broadcast, and kept coming back to the idea that this fight has knockout of the night written all over it, and really should be seen live across the globe.”

“Elvis brushed off a knock this week with Boxing SA’s decision to ban him from competing as a boxer. From our side, we have no intention of overlooking the phenomenal talent that Moyo brings to the Hexagon,” Cartmell added.

In addition two more exciting fights have been announced. Cape Town’s Tshilomba Mulumba enters the Hexagon for the second time to face the experienced Kanyeba Anicet, and Tumisang ‘President’ Madiba returns to clash with fellow Johannesburg based athlete Mbulelo Swekile.

EFC 32, presented by BetXchange.com, returns to the Carnival City Big Top Arena, Johannesburg, on Thursday 07 August 2014. Tickets on sale at www.computicket.com. Book your cinema ticket to all fights live and in state of the art digital projection at www.sterkinekor.com. Watch the entire event live, from anywhere on the globe, via online streaming at efcafrica.tv.EFC 32