Business Day on the business of fights 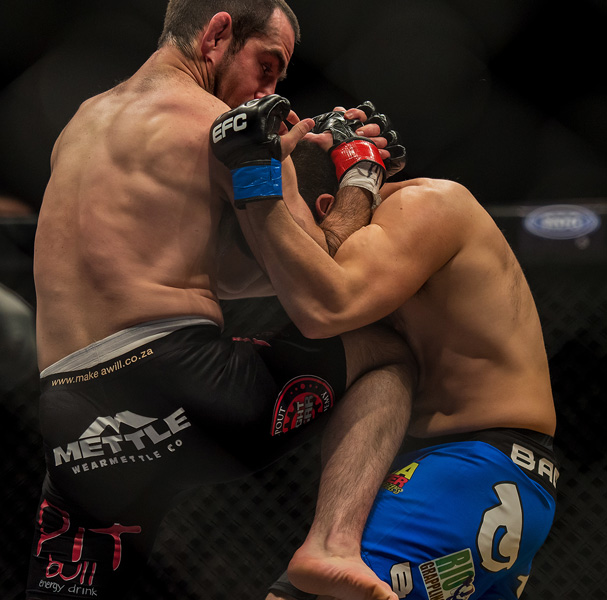 Brendon Katz scores a knee to the body of Nelson Feiteira, EFC 31

NKAZIMULO Zulu might have been the underdog for the bantamweight title at the Extreme Fighting Championships in Johannesburg, but there was no shortage of spectators scrambling to bet that he would win.

Zulu, 24, was taking on an undefeated Angolan, Demarte “The Wolf” Pena, in mixed martial arts, which has grown rapidly to become the third most-watched sport in Africa, after soccer and basketball.

Bouts take place about once a month. Any fight typically racks up an average of 50 000 bets, online and at the event, and the take runs into the millions. BetXchange’s Warren Ho says “mixed martial arts and sports betting have their similarities — they both offer people a complete adrenaline rush, and as industries in South Africa both are still new to the public”.

As the bout begins, Zulu and Pena enter the hexagonal cage that gives the sport its informal name, cage fighting. Zulu belts out a few big hits, but it is soon clear that Pena, who holds the featherweight title, just has too much muscle . (I bet R100 on Zulu .)

The lights, loud music, booze, scantily clad girls, betting and the hard-hitting fighters make for quite an addictive cocktail.

The cheap seats sell for R295 and VIP tickets for R990. Each event attracts a crowd of about 5 000 and millions of TV and online viewers.

In six years, the privately owned entity Extreme Fighting Championships, known as EFC Africa, has grown to an estimated R100-million enterprise, according to founder Cairo Howarth. Money flows in from ticket sales, sponsors, broadcasting on television and online. The merchandise generates R10-million a year in sales.

“Before we started, mixed martial arts fights were mainly held in school halls and gyms with 100 or 200 people attending,” said Howarth. “I always knew there was potential to blow it out of the water .”

Then came the turning point.

“My brother told me to please stop talking about it if we were not going to do it. So we booked the Coca-Cola Dome in Johannesburg for our first event and knew that even if we sold all the tickets, we would still be making a loss. But we wanted to do it the best we could.”

To make that first big night work, he said, they “also had to pay the fighters better than anyone else”. This was not easy — some had been with certain promoters for more than 15 years.

Getting someone to broadcast the event was challenging. “We had to shoot our own promotional video and buy airtime from SuperSport,” said Howarth, who had a TV production company at the time.

But 31 events later, EFC Africa has signed a three-year broadcasting deal with SuperSport and exclusive contracts with 120 fighters across Africa. SuperSport marketing manager Clinton van der Berg said there were challenges for niche sports — they needed to demonstrate a good level of professionalism and have a strong business plan.

“It must make commercial sense for SuperSport to make the investment. EFC Africa has proven to be an excellent association and we are seeing solid growth in viewers’ interest.”

The guts-and-glory sport is gaining significant traction in other African countries. And it is providing a career for some who might not have otherwise had many opportunities.

Pena, the winning fighter for the night, lost his parents in the Angolan war and fled to South Africa. Today, he spends a lot of time promoting the sport in his home country. He was invited this week to meet Angolan Sports Minister Gonçalves Manuel Muandumba.

Pena is in his final year of business management at the University of Pretoria. He plans to use his expertise to build his brand as “The Wolf” at EFC Africa. Pena starts training every day at around 5am in Sunninghill, attends classes during the day and trains for another four hours in the evening.

It has paid off for him. A fighter of Pena’s calibre can earn about R80 000 for a title win and attract sponsors who will pay anything from R10 000 to R100 000 a month. Speaking to him after his fight, I confessed that I bet on his opponent. Pena responded: “Next time you’ll know better.”