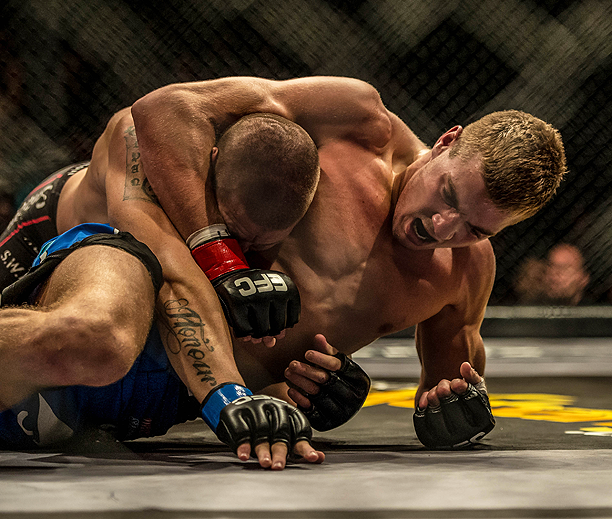 Johannesburg (South Africa) – McLellan vs. Du Plessis for the middleweight title has created a wave of controversy. With just over a week to go to the fight of his life, 20 year old Dricus Du Plessis sat down to look at the storm in his teacup, and address everything.

When this fight was signed Du Plessis famously said, “I can’t wait to f#ck Garreth up.” Du Plessis replies:

“That comment was in a conversation and the media got hold of it. That’s not who I am. I respect Garreth as a champion, but I’m also not apologizing for it. I believe I’m better than him.

“He thinks I’m underestimating him. I’m not, I’m overestimating him. I think he can beat me anytime. When I go to sleep I fear him. In training I keep thinking ‘that’s how he’ll catch me’ and I work to get better. I’m prepared, the best I’ve ever been.”

This fight’s controversy is rooted in Du Plessis’ having tried to join McLellan’s gym, FFM, when Du Plessis was a teenager. Du Plessis remembers months of hitting every class, and being bullied at Saturday sparring sessions, before being told that he wasn’t ready to fight. McLellan remembers a kid that attended a class or two, that hit hard at sparring and so got hit hard in return.

“They really beat me up. I was small then, 17 years old, 73kg, and they punished me. I remember sparring Norman [Wessels], he’s a big dude. It was fine for me. I told myself that I’m tough and I want to be a fighter. That’s what it takes.

“My father thought that it’s not the right way, and I told him ‘no Dad, that’s what it takes to be the best.’ I was attending every class, I never missed. I asked them if I could fight and they said they’ll see. So I went back to K1, and a year or two later I won the K1 world championship.

“They didn’t believe in me, maybe I wasn’t their standard then, and I’m fine with that. The fact is, though, that they made a mistake, and it’s coming back to bite them in the ass.”

At twenty years old Du Plessis will be the youngest champion in EFC history if he takes the title. On whether he’s ready to do it, Du Plessis replies:

“I knew that if I’m comfortable fighting Donavin [Hawkey], then I’m ready. He’s a scary looking dude, believe me, but there was never that fear, never that doubt. I was nervous, but it was a good nervous. I went to work, I did exactly what we planned. I felt comfortable.

“There’s pressure, but the only thing I’m afraid of is losing. I’m too young to be intimidated. That’s why I put in the hours. I don’t plan on losing. Not to him.”

After winning the WAKO world title Du Plessis decided to give MMA another try, and at the same time began to study in the city of Pretoria. In that city he found Team CIT, the home of lightweight champion Leon Mynhardt, former welterweight champion Michiel Opperman, and the legendary Tumelo Maphutha.

On his new fight family, and whether it’s CIT vs. FFM, Du Plessis replies:

“Destiny brought me to CIT. That’s how destiny works, it takes you to where you need to be. Here I am with the toughest guys in the business. The best grapplers, the best strikers, the best coaches.

“This isn’t about CIT vs FFM. This is about CIT, for me. This is about my home, my family, and showing to them what a great team they are. The only way I can do that is by fighting the best I can, doing what they taught me, and putting on a spectacular performance so that the world can see what we do here.”

McLellan is a legendary champion. He was the first EFC athlete to regain a title, having built one of Africa’s greatest MMA forces out of a title loss and a shattered knee.

On how to fight an opponent like that, Du Plessis replies:

“I’m looking to implement my game plan. My game plan is to stick to the game plan, do what we did in training, and take the gap when it comes. If it comes in the first I’ll take it, if it’s in the fifth, I’ll take it.

“Most of his opponents follow his game plan, he forces them to fight the way he wants to fight. I’ll be fighting my fight, doing what I do. I’m going to be forcing him to change his game plan, and once he does that, he’s in my world.”