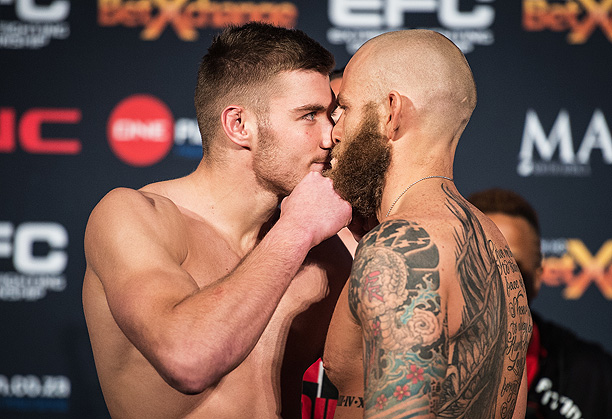 Johannesburg (South Africa) – The home of African MMA got its first taste of EFC today, as hundreds of fans raised the roof when 22 of the continent’s greatest athletes converged on the Durban International Convention Centre (ICC) for the official weigh-in of EFC 33.

“No other fight matters, nothing else matters, but this one,” said the challenger in a pre-fight interview. He backed his words by pressuring the champion in their face-off, touching foreheads and flashing a trademark grin.

McLellan, showing all the experience that losing and regaining the title has taught him, remained ice cold, finally breaking off when he was ready, a clear message to the young challenger.

“He’s going to come out hard and aggressive, but we’ve prepared for that,” said McLellan in an interview with EFC commentator Dirk Steenekamp after. “…on fight night I’m going to be the monster in his head that he has to fight.”

Co-headlining the event is the equally massive bad blood rematch between Durban and African MMA legend Martin ‘The Punisher’ van Staden, and the notorious Jeremy ‘Pitbull’ Smith, hailing from Johannesburg.

This bout is Smith’s first drop down to welterweight and he had no problem with the cut, hitting the scale ripped and ready. The men were cordial when finally facing off, no doubt the calm before a tropical storm.

Legendary Duban brothers Wesley and Donavin drew massive cheers from their home crowd. They hit the scale for their bouts with Brendon Katz and Bernardo Mikixi respectively. Mikixi, making his first cut down to light heavyweight, stunned all with a perfect drop, looking supremely conditioned and ready to fight.

Tomorrow night’s card is packed with the cream of Durban’s talent, a Durban native featuring in every bout but one. All athletes made weight. A perfect score and a reflection of the enthusiasm that all are feeling ahead of tomorrow’s historical night.

EFC 33 weigh-in results were as follows: