Opperman believes Speechly has the edge 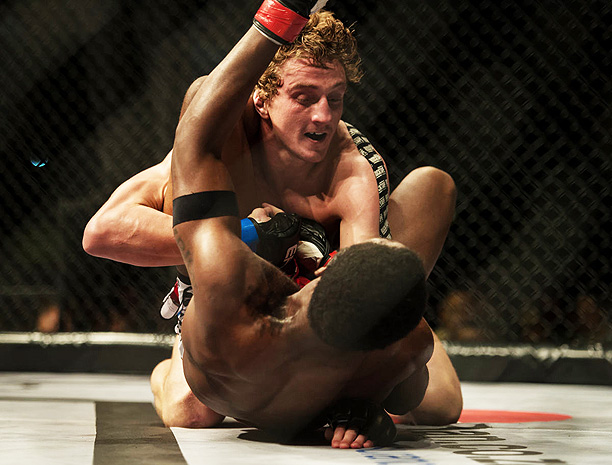 Johannesburg (South Africa) – Henry ‘Herculeez’ Fadipe ripped his way through the welterweight ranks to take the title, which he defends against Adam ‘The Prodigy’ Speechly this Thursday night. On the strength of his string of finishes many feel that he has the odds edge over Speechly. Former champion Michiel Opperman has a different view, however.

“Adam’s wrestling skills are far better than Fadipe’s,” he said, speaking of the legendary grappler. “Technically on the ground, and wrestling wise, Adam is years ahead.”

Opperman would know. An acknowledged ground maestro himself, he fought Fadipe at EFC 26. There most will agree that he dominated the current champion for the first two rounds with superior grappling. It was only in the third where he suffered a sudden knockout courtesy of two vicious Fadipe elbows.

“When I wanted to go down I took him down,” Opperman said. “There was no resisting it. There was no sprawl or counter wrestling or anything like that. It didn’t matter what he tried, I was able to just push through it.”

“What really stood out for me was I was able to pin him down, which was strange for me. It wasn’t a problem.”

Opperman is Speechly’s training partner, and has been grappling with him at least five times a week in the lead up to his title fight.

“Adam will be able to control the fight, he is much stronger than Henry,” he said.

Opperman sees that fact that he was knocked out by Fadipe in the third round as irrelevant in this case.

“My mistake was by the time we were into round three I knew I had him on points, and I wasn’t looking to finish,” he said, describing the end of that fight. “I had him in a sort of a half a full guard. I was thinking ‘I’ve dominated him for three rounds, what’s he going to do now?’ As I was thinking that he caught me and I went to sleep.”

Opperman chuckles. “I wasn’t paying attention. It was a big mistake and he capitalized. That’s what he’s good at. You give him an opening, and he takes it. I’ve lost fights like that, and won fights like that.”

When reminded of the fact that Fadipe has been putting everything into his ground training in his own fight camp, Opperman shrugged.

“Henry will obviously have gotten better since we last fought, but he’s still the same fighter. The bottom line is he doesn’t have the grappling background that Adam has. And as much as he’s been training, so has Adam.”

“Henry is a very dangerous striker. He’s unorthodox. Adam is also unorthodox. I think if he just remembers to wrestle whenever he’s feeling uncomfortable, he will dominate. He’s healthy, he’s strong, he’s had a good camp. I see him winning this fight.”