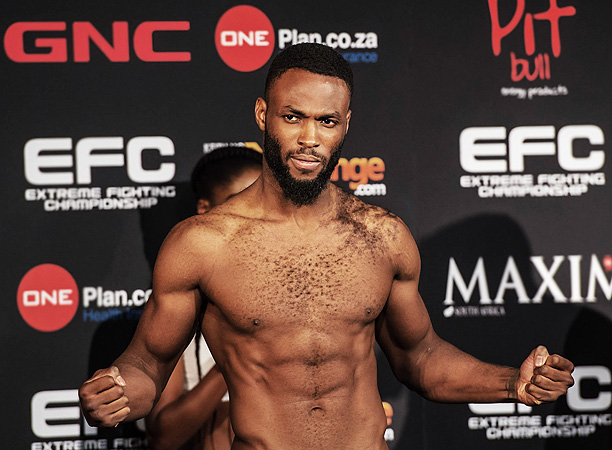 Johannesburg (South Africa) – Today’s EFC 32 weigh-in delivered a special treat for fight fans, who converged on Johannesburg’s Carnival City to see the stars of tomorrow night hit the scale, and face off for the first time.

The welterweight strap has never been defended. Ironically, the ‘curse’ began with Speechly, who was the very first welterweight champion, and who looks to re-take the belt tomorrow night.

Speechly has proven himself to be a humble and pragmatic individual, a stark contrast to the dynamic and outspoken personality that is Fadipe.

“I know that I am going to get out what I’ve put in,” said Speechly, referring to a brutal training camp he has endured to ready himself for his challenge. “I will be the next champion, again.”

Fadipe, as always, was entertaining but firm in his reply.

The Johannesburg suburbs of Springs and Boksburg are catapulted onto the world stage when Boyd Allen and Barend Nienaber meet to contest for the vacant featherweight title. The two athletes grew up in the adjoining suburbs, and tomorrow night fight for home and the title of EFC’s featherweight champion in a live broadcast beamed across the globe.

Both men made the required weight perfectly, and faced each other in a tense stare down before being interviewed by EFC commentator Dirk Steenekamp.

“I am going to be the next champion, and he knows it,” said Boyd Allen with his trademark deadpan delivery, sending a chill through a crowd very aware of the merciless performances Allen is capable of.

A smiling Nienaber was unaffected. “I’m coming at him like a truck,” he said, “and nothing is going to stop me.”

Stand-out moments further down the card were the much hyped first meeting between Johannesburg’s Gordon Roodman, and the man now dubbed ‘The Kid’, Cape Town’s Shaun de Lange. Roodman rushed De Lange as they faced off, reacting to De Lange’s comments last week, where he advised Roodman to get in the gym rather than spending his time hyping his fight on social media.

Sors ‘Guru’ Grobbelaar, the celebrated kickboxer who co-headlines tomorrow night’s prelim card, surprised the crowd with a bold Mohican haircut, a reference to his determination to finish his opponent, Cape Town’s Knife Didier. Knife is competing in only his second bout, but already has a notorious reputation after knocking out the feared veteran, Ricky Misholas, in his first appearance at EFC 30.

Two athletes failed to make weight at the time of weigh-in. Gordon Roodman missed his mark by 1.10kg, and was prohibited from cutting any further weight by EFC medical staff. His bout now hangs in the balance, pending a medical clearance to be given by doctors tomorrow morning. Sizwe Mnikathi weighed in 550g over his limit, but was able to make the drop successfully within the two hour cutoff period.

EFC 32 weigh-in results were as follows: