‘One Gear’ To Face Vandam 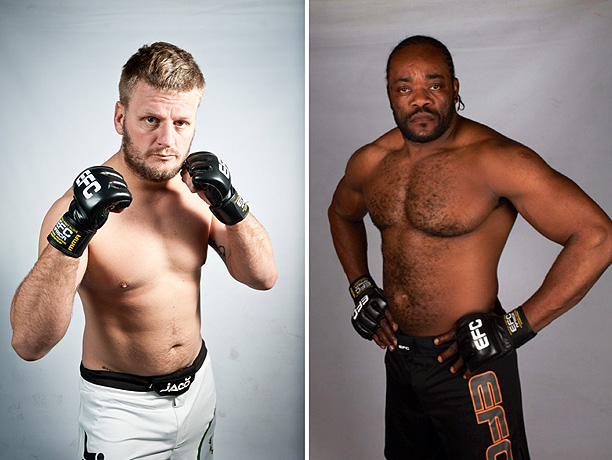 Johannesburg (South Africa) – Former heavyweight champion Andrew ‘One Gear’ van Zyl will take on the massive Vandam Mbuyi, in what could become a heavyweight top contender bout, on October 2nd.

Van Zyl is already building a strong case for a shot at the belt. Earlier this year he made a smooth comeback with a first round submission of Elvis Moyo. He was originally slated to face Mbuyi on that night, and had spoken about looking forward to testing his hands and chin with the DRC giant, but Vandam had to step off due to injury.

Will Van Zyl move back to his original plan, and take on Vandam’s huge punching power? Van Zyl has proven a massive chin against men like Mikixi and Grobbelaar.

Vandam was building his own assault on the title when he was derailed by Brendon Groenewald at EFC 28. He went two rounds with Cape Town’s ground master, scoring numerous strikes, including a massive knee to the jaw that he was warned for (Groenewald was grounded), before ultimately falling to Groenewald’s grappling skills.

Mbuyi has been hard at work since, and will know that Van Zyl’s greatest threat is by submission.

Should Vandam beat the former champion there will be few other than the man holding the belt who could be seen as a legitimate threat. Should Van Zyl put Mbuyi away, the same question applies. Who, if any, would stand between him and a title shot?

On October 2nd all questions will be answered.