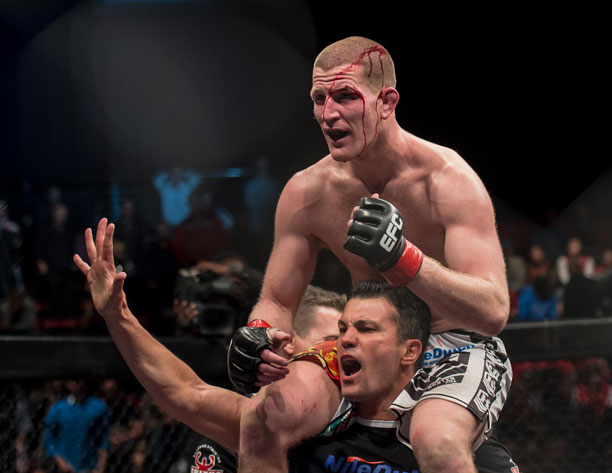 Johannesburg (South Africa) – EFC 32: Fadipe vs. Speechly and Allen vs. Nienabar took place at the Carnival City Big Top Arena tonight, and will be long remembered as a night packed with sensational fights.

Fadipe went into this bout the bookies’ favourite with a string of devastating finishes behind him. Popular sentiment was that he was unbeatable, but Speechly knew different.

Speechly, EFC’s first ever welterweight champion, came in with a strategy of dominant grappling and executed it to perfection – nullifying Fadipe’s dangerous finishing capabilities. The ‘Prodigy’ survived a series of powerful submission attempts from the champion and weathered an armbar that nearly hyper-extended his elbow, to grind ‘Herculeez’ out of the fight by unanimous decision.

In so doing, Speechly continued the fabled welterweight curse. A pattern he began by losing the very same belt on his first title defense over three years ago. The welterweight belt has still never been successfully defended. It now falls to Speechly to end what he started.

Boyd Allen’s journey to the featherweight title finally ended tonight. Allen had been campaigning for the title over an incredible seven fight unbeaten run, as well as waiting patiently for teammate Demarte Pena to vacate the title before he challenged for it. He kept his composure, attacking a courageous and highly competitive Nienaber fiercely, before taking his opponent’s back and sinking a rear naked choke to seal his victory.

To predict the outcome of a fight between Liam Cleland and JP Kruger was always a difficult proposition. Cleland is known for his edge on the ground, and Kruger for his kickboxing prowess. Kruger immediately set to hacking at Cleland’s lead leg with kicks, raising a welt and causing Cleland to wobble on his feet. In retaliation Cleland took Kruger down and smothered him with a dominant top game. All three rounds followed a similar pattern which took the fight to the judges, and delivered a somewhat controversial split decision victory to Kruger.

The evening’s second main card bout saw Elvis Moyo in a mean mood. He spent three rounds stalking Wilhelm Strauss, waiting for an opening inside his opponent’s far longer reach. Once he found it he set to clubbing Strauss into a TKO stoppage. Moyo hunted slow, but was deadly when he opened up.

Gordon Roodman versus Shaun de Lange was an unforgettable bout from start to finish. Roodman came screaming out the blocks, landing multiple shots to kick the fight off, but soon found himself streaming blood and on the back foot as De Lange’s superior reach came into play. A war of attrition ensued, both men pushing each other beyond the limits of endurance, the judges forced to separate them at the end. A split decision handed De Lange the win.

Performance bonuses were handed out to the sensational fight of the night between Wade Groth and Peter Nyide, who headlined the Ster-Kinekor prelim card. In addition, Gordon Roodman and Shaun de Lange were awarded for their absolute war on the main card, as well as debutant Oumpie Sebeko and Tumisang Madiba. The submission of the night award went to Boyd Allen for his rear naked choke victory over Barend Nienaber.

EFC travels to Durban for the first time for EFC 33: McLellan vs Du Plessis, presented by BetXchange.com, at the Durban ICC, Durban, on Saturday 30 August 2014. Tickets on sale at www.computicket.com. Book your cinema ticket to all fights live and in state of the art digital projection at www.sterkinekor.com. Watch the entire event live, from anywhere on the globe, via online streaming at efcafrica.tv.