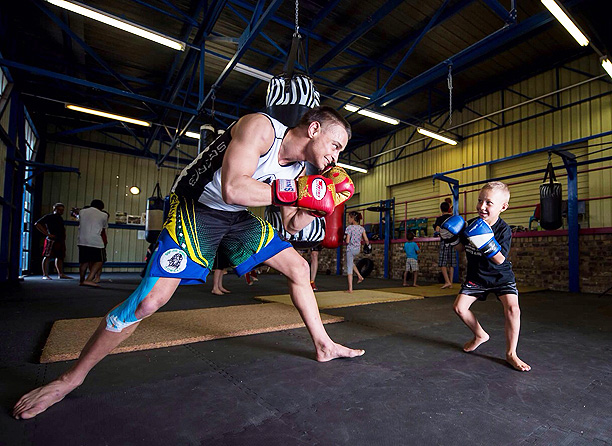 Johannesburg (South Africa) – The day after a pre-fight photo shoot with world-renowned EFC photographer Anton Geyser, which captured the challenger whilst training at XKT Boksburg, Francois ‘Franaconda’ Groenewald sent a belittling message to the champion Demarte ‘The Wolf’ Pena.

“Training for ‘The Wolf’ – Taking your belt will be as easy as taking candy from a kid.” Read the tweet that Groenewald put out this morning along with the above photo.
twitter.com/franamma/status/509994344968110080

Pena didn’t respond on Twitter, but when contacted for his comments, he simply said, ‘he’s just another guy with hopes and dreams, just like everyone else who thought they could beat me. But that dream will end, they will not overcome my own.’ Pena added, ‘I’ve done this so many times, I know what it takes to be the champion.’

Francois Groenewald has been a top bantamweight contender since the inception of the division in the EFC and has been waiting patiently on the sidelines for his shot. Nicknamed after the mega-snake, and best known for his slick submissions, Franaconda has dominated every opponent that the division has thrown at him.

After submitting the wrestling sensation Pierre Botha, and getting the TKO victory over the experienced boxer and former title contender Leo Gloss, the BJJ expert knows that he has exactly what it takes to defeat the Angolan warrior.

EFC 34, Thursday 2 October, Carnival City, Johannesburg, presented by BetXchange.com. Tickets available at www.computicket.com. Book your cinema ticket to all fights live and in HD at www.sterkinekor.com. Watch the entire event live, from anywhere on the globe, via online streaming at efcworldwide.com/efc_africa_404.php.