Sparks fly at weigh-in ahead of EFC 34 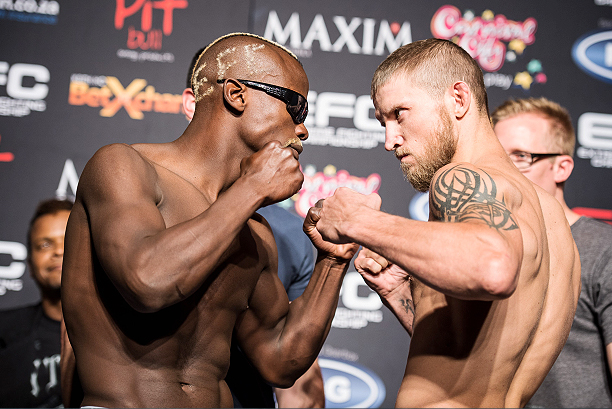 Johannesburg (South Africa) – EFC returned to Carnival City for the official weigh-in of EFC 34. The room was filled with tension as 24 of the organisation’s greatest athletes rose to the occasion, backed by a boisterous crowd who packed the room.

The event is headlined by one of the toughest athletes in the world, Leon ‘Iron Lion’ Mynhardt. He will be defending his lightweight title against the organisation’s ultimate finisher in Sibusiso ‘The Monster’ Mdoko, hailing from Cape Town.

“I am not going to do any talking here. I am going to do my talking in the Hexagon,” said Mdoko in a pre-fight interview. He backed up his words with a confident showing in his face-off with the champion.

Mynhardt, showing his love of competition, looked ready for action on stage with an angry grimace on his face. Eventually separating from the face-off, he made clear his intent in a brief pre-fight interview with EFC commentator Dirk Steenekamp.

“I am very excited to fight again. It has been a while,” Mynhardt said. “Everyone knows how much I love to fight!”

EFC 34 presents Pena with his biggest challenge to date, and his first title defence at bantamweight. Meanwhile Groenewald has been on a tear through the bantamweight division to earn his shot at the champion. “After ten fights in the EFC, this is my time.” he said.

Also featured on the main card, former heavyweight champion Andrew van Zyl looked very nonchalant in the face of his challenger Vandam Mbuyi. They are joined on the main card by Champion Dalcha who filled in on single days’ notice to face notorious kickboxer Pete Motaung. Featherweight phenom Tumisang Madiba and Pierre Botha round off the top fights.

Most notably in the Ster-Kinekor prelim bouts, Lourens Botes saw that Sebeko failed to make weight and proceeded to offer a skipping rope to help his opponent. Sebeko did not take this well and aggressively pushed the rope out of Botes’ hands, initially refusing to face-off with him.

Three fighters initially failed to make weight. Lyle Karam and Oumpie Sebeko, who were 0.55kgs and 2kg over respectively and are subject to a financial penalty. Warren Allison was a single kilogram over which he managed to cut within the two-hour cutoff.

EFC 34 weigh-in results were as follows: